The last few months have been a whirlwind for me. Back in the summer, I started working for two different websites at about the same time, Craft Test Dummies and Fairfield World. This was fantastic for my creativity, but perhaps not so fabulous for my personal blog, as my mentality is clients before personal. The two other sites stretch my creativity, because I have to build projects around assignments and products. This is a blast to do. Then, when I look at my blog, I'm stumped at what to make for you all, because without that guidance, it's all on me. Which I'm used to and enjoy the complete control I've had for years. I do thrive with collaboration though, and I'm happy to continue down that path of working with other creative minds.

Some of the projects I did for Fairfield World in 2014. 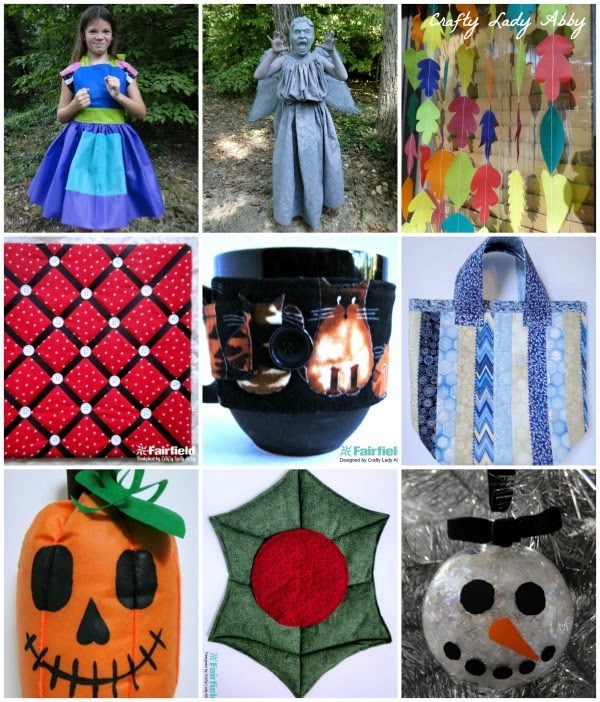 I've had a goal of doing YouTube videos for a couple years now, but up until the end of last year, I didn't have a nice camcorder, so I bought one with money I'd earned from teaching craft classes. For which I'm currently doing again for fun...and well money too. I also bought a desktop computer which was handy because my trusty laptop died a few months later. My old sewing machine also died (I think they were in cahoots), so I bought a replacement for that. Zap went my money, but I was ok with that, because I got some much needed updated equipment. However that didn't leave money for other things I'd need for making videos. Fast forward till late Spring when I started writing for an income (Whoot!). I could finally afford some things I needed. I ordered softbox lights, but they didn't come with the poles to hold them up...still peeved about that. I still need to fix that error. I set aside this goal for a bit, since work was picking up with additional project requests for the Houston Quilt Market. (My grandma was super impressed when I told her about that). As the year closed, I thought about that goal again and made a few attempts to film with what I had. The holidays and projects consumed my time, but I felt guilty for still not accomplishing that goal, though I'd accomplished many. I still have plans to make this work, and even thought of a theme that fits my expertise. I can make many things, but if you've been following me for a while, you know my specialty is things of a darker nature. I decided to focus on "Dark DIY" for my personal project, with the hopes of still keeping the collaborative part by having guests and crafting together. I know a lot of local artists and crafters with a wide range of skills and knowledge to share. I figure I can be more social in a way that makes me comfortable...hanging out at my house and crafting. I plan to set this up in my living room, which has the most natural light. A few months ago, I got my family's old wood drafting table, which has been mucho helpful in crafting in the same room as my family...and watching a lot of Netflix. 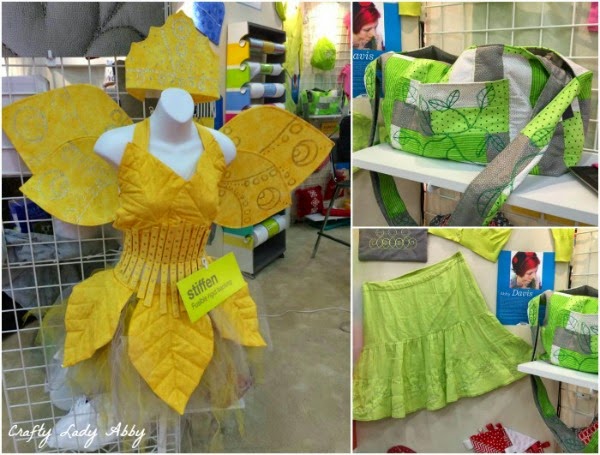 At the beginning of 2014, I started organizing and rearranging areas of my home. I've made a lot of progress, but still have a lot of old stuff to purge, donate, sell, and reclaim the space. I have a lot to just toss too. Over years of having depression, I just let it pile up. 2014 was the 1st year in many that I successfully overcame much of my depression. Sure it still hits occasionally, I cry a lot and I'm generally not fun to be around. It's much less than it used to be. This is hugely in part because I set out to reclaim my house from the clutter and distress. I started with the dining room, which got an organizing overhaul (and could use another as it's getting cluttered again in sections because of...well I really have no excuse). Furniture was majorly moved. A cart went downstairs to help with a craft room (which was a playroom and still need major work). A desk came upstairs, for our desktop computer. It's backed by two awesome CD cases that my friend Noah put in my car after he'd had new fancy ones built. This helps organize CDs, but also serves as a hub for commonly used supplies/tools and business stuff. I small cart got made into a printing and equipment cart. I organized all the electronic gadgets and cables. I moved a bookcase to a wall...it was a room divider, but closed off the space too much.

Furniture got shifted around in the living room, so it flowed better. The playroom got purged of many toys. Both to friends and a foster support center where a social worker friend works. They are getting more use than they did by our over privileged daughter...who had grown out of most of the toys at this age. We still have a lot to get rid of, and when I have time, they will be donated to a local LGBTQ thrift store, Diversity thrift. I went through my closet a couple months ago, making a huge pile of colorful clothing that hasn't been worn in over 5 years...I'm embracing my dark side. A lot of heels and other shoes that haven't touched feet in years (some never) got put in the pile. While I want to sell a lot of those to a local second hand shop that buys clothing to resell, many will be donated to that same LGBTQ thrift store. Besides it being an awesome group and wanting to keep people looking fabulous with my gently worn wardrobe, I do fit into that spectrum. Where doesn't matter much. It's a group that is close to my heart. Besides donating stuff there, I've done a fair amount of shopping both there and Goodwill. Goodwill of course helps people with disabilities, who don't get paid much, but Diversity is run by mostly volunteers. I don't support Salvation Army in any way, since they are anti-LGBTQ, which would include myself. My giving away my old things to others who need them, not only gives me more space, but warms my little dark heart...well you know red and muscley like everyone elses...sort of.

Some of the projects I did for Craft Test Dummies product reviews. 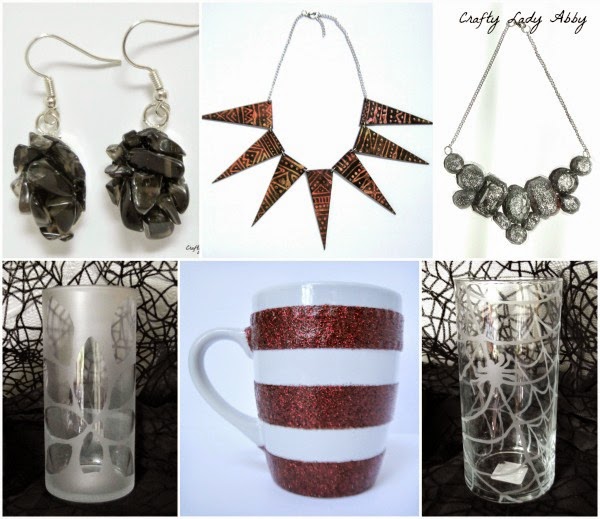 Moving forward in the year, I knew that working for Craft Test Dummies might give me the opportunity to attend CHA's Mega Show. I do enjoy playing with new products and testing them out, which is why I applied to write for Craft Test Dummies. Attending the show is nice bonus. On Friday I board a plane to CA to attend the show. This was HUGE goal of me, after years of seeing these amazing photos, stories, and videos from the shows. I can officially check that one off my goals list...well when I land I suppose. I'm am overwhelmed with excitement to see so many amazing crafters that I've gotten to know over the years both on Facebook and YouTube. Though I might not have made my own craft videos yet, I have been a dedicated YouTube subscriber for several years...mostly craft and beauty channels. For me this is me successfully achieving a goal that I set out to do last year, and set myself on the path to really achieve, about 6 months ago. I stepped out of my comfort zone and depression to make my life goals happen. This wasn't easy. There have been a lot of rough days...like the panic attack when those fairy wings wouldn't fit into my sewing machine to finish them. I took a break and then sewed them together by hand. The good days heavily outweigh all the bad. Many years ago, Noah told me how amazed he was that I was humble about my talents. Though I still am in many ways, because I have no basis for comparison what other crafters are capable of, I have a lot more confidence in what I'm able to reasonably accomplish. I'm happy to take on a challenge and adapt quickly to new things. There's a saying "Fake it till you make it." I did exactly that, learned along the way, and have some amazing experiences because of taking a risk. The worst someone could tell me is "No". I still have a lot to learn, but that's just life. I hope it's a neverending stream of new experiences, so I never stop yearning to learn.

In turn, I've reached a point where I've learned so much and written so many tutorials (I'm thankful for Skull-A-Day and Noah giving me a reason to start doing those), that I've been teaching classes. Since September, I've been teaching a Art Quilts program with Art180 (a local non-profit that helps with after school art classes within the community) at Northstar Academy (a school for special needs kids from K-12). I have high school age students, an assistant and two of their teachers to help with any of the kids needs outside of my skills. It's been lots of fun and the students have made amazing work. They are a great bunch of kids. While I'm off to CHA in a few days, I have a final class with them this week where they'll finish prepping for their gallery show. The show is the day after I return from CHA. I'll be jet lagged and off in time zone, but more importantly be there for my students to show off their work. The week after we'll have a big party at their school to celebrate their achievements. I'll miss them terribly. I'm hoping to teach a book making class in the Spring, with Art180 and another great group of kids. I want to focus on overcoming negative circumstances, which is something I was finally able to do, providing myself with confidence and the ability to help others be happier. 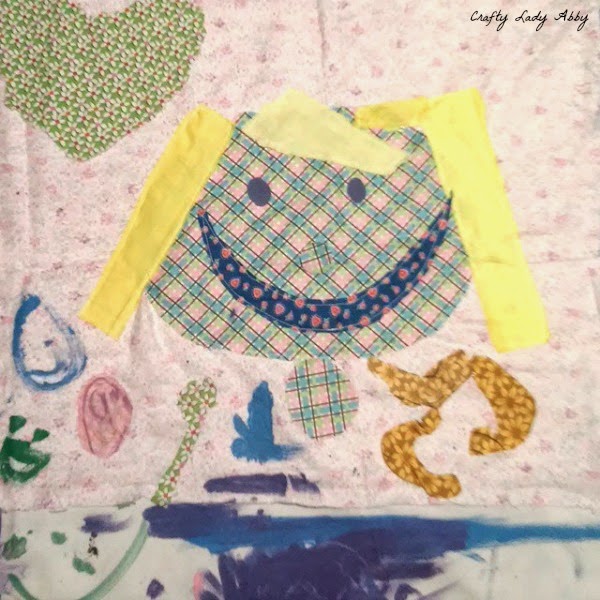 To conclude, here is my student Adeline's quilt. The girl is her. the bottom of this quilt panel is covered in smiley faces. Despite your circumstances, always make time to smile. Also make time for crafting. Even 15 minutes a day. Stick a little sketchbook and pencil into your bag or pocket. Break those out during lunch, waiting rooms, waiting for family to get ready, waiting for a meal to cook...any part of the day where you have a few minutes free. Set aside some time to be creative. SCHEDULE IT! Make stuff with your friends and family. Crafts and cocktails anyone? Family craft night!!! Your toddler can rock some glue, a cotton swab, and paper shapes. Playdoh, pudding paint, watercolors, and other non-toxic crafts are great too. The older the kids get, the more skills they will have and the harder things they will try. You should see the things my daughter makes. She's figured out how to make amazing journals, and duct tape items, which aren't crafts I do! She does her own thing, because she's gained a lot of confidence over the years. We both make jewelry, and she's been bugging me to let her on my sewing machine. You'll be surprised at what you learn about yourself and your skills. If you are having trouble finding time and motivation to be creative, check out my crafty friend Jennifer's "Making Matters" campaign on her blog Hydrangea Hippo. She'll give you all sorts of advice from creating to reorganizing. Being creative reduces your stress level, gives you confidence, expands your skills, and makes you happier. It also leads to craft hoarding...but you can never have too much glitter. Whatever craft you choose, have fun with it. Happy Makery!
Email Post
Labels: Art 180 CHA 2014 Craft Test Dummies creativity Fairfield World life teaching