Technically this is my 2nd day at CHA, but the 1st on the show floor. Yesterday, I traveled from Richmond, CA to Atlanta, GA, to Los Angeles, CA, to Anaheim, CA. In Atlanta, I was checking Facebook and saw that my Fairfield World teammate, Keri Lee Sereika, was also in the same airport. Her gate was a few down from mine, so she stopped by to meet each other in person. 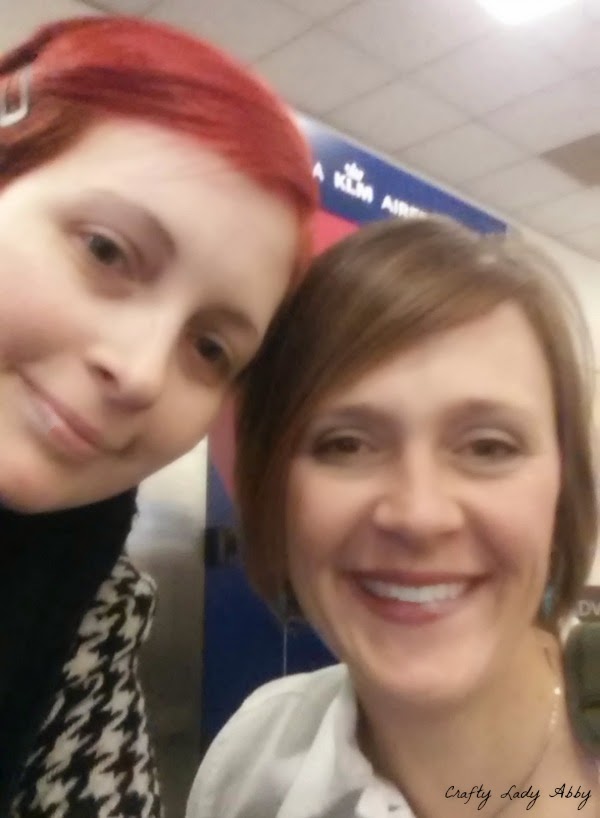 It was a long day of traveling, but I was happy to arrive in sunny California to see new products, companies and long time friends. After I got checked in, Jenny and Vicki took me to get our show badges. Sara arrived, and we went to the Hot 20 media event. There were lots of great new products among the selected 20. My favorites are the Beadalon Artistic Wire 3D Bracelet Jig, Crystal KuBaton, Lumi Photo Printing Kit (a solar ink), DIY Decor tape by Hazel and Ruby (think huge washi tape), and Tulip's Colorshot Instant Fabric Color. I'll go into these later once I explore them more. After the event, we had dinner together. Later we met some other crafters to catch up and enjoy the evening.

Today was about exploring all the booths on the show floor for things I felt were innovative or on trend for the craft industry...and well cool stuff I like. I always look for things that can be used in wearable and home decor ways...jewelry, dyes, yarns, paints, etc. The show isn't lacking inspiration. The sheer volume of booths is overwhelming. Tomorrow, I'll likely have a better game plan of booths I want to explore more. I traveled with the Craft Test Dummies team to document the show and write articles.

The morning started with a media event for MD Hobby and Craft. They have a line of sheet metals for crafting. Their booth was decorated with a mix of industrial and whimsical designs, mostly created by designer Linda Peterson. The metals sheets are textured, chalkboard, chicken wire, and flat. They are paired with Liquid Nails, which is a great bonding glue for metals. I was most attracted to a chicken wire and paper mache dress form adorned with metal mixed media necklaces, and a sculptural floral design. I felt this best showed off the range of products (excluding chalkboard) in a way I can relate to for wearability. The metals, just like normal ones, can be patinaed and rusted, if you like that aged look...and I do. 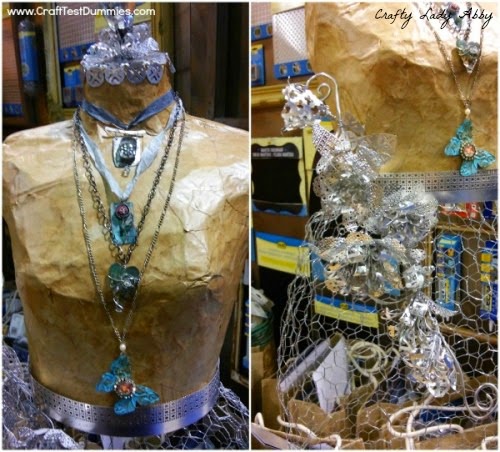 Next we headed to Krylon, which is my favorite spray paint brand. They have a new colored sea glass, clear dry erase board, and chalky finish paints. Vicki had designed a lounge area using a bright color palette (my current favorite). Of the many things she made, the coffee table sealed with dry erase paint was my favorite. I could see this in a family home, giving kids a fun place to draw that can be easily cleaned up. The dry erase paint is also create for custom calendars and memo boards. I could use a jumbo one in my house. Chalky finish is a huge trend now, so it's great to see them incorporate that and other ongoing trends into their paint lines. They have a spray wax, which I'm interested in playing with, that coordinates with the chalky finish paints. 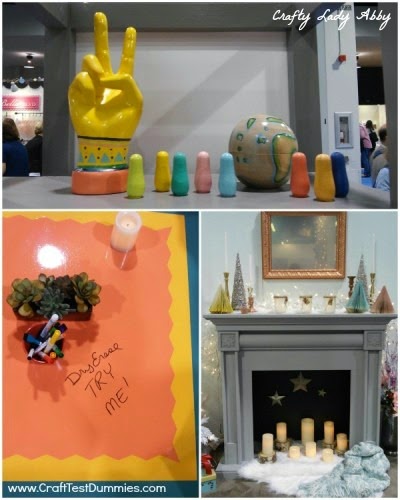 Then, I roamed around checking out brands I was familiar with, finding new ones along the way. I saw a lot of fantasy inspired booths and products, which are banking on a huge surge in fantasy literature and costuming. I commend companies for hopping onto this new trend quickly. The most amazing booth was Spinrite Yarns, with their "Yarnia" theme. Think of the characters and world of Narnia, but all in yarn. From the clothing to the animals to the striped tent! The level of detail is incredible. They had two knitted wolves over taxidermy forms. The designers used an eyelash yarn to give a fur effect. 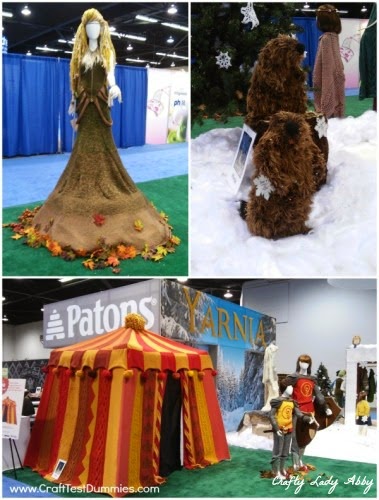 Speaking of yarn, I wandered over to the Lion Brand Yarn booth. They had a wrap around of "#scarfie", encouraging visitors to take photos of themselves wearing a scarf using Lion Brand Yarn. There was a giant screen with a knitted cell phone case. Each of the characters was knitted using a variety of stitch patterns, showing off some of what their yarn is capable of doing. I'm a crocheter, not knitter, but still I find the art form fascinating. I do wish there was more crocheting represented, as I only saw knitting. 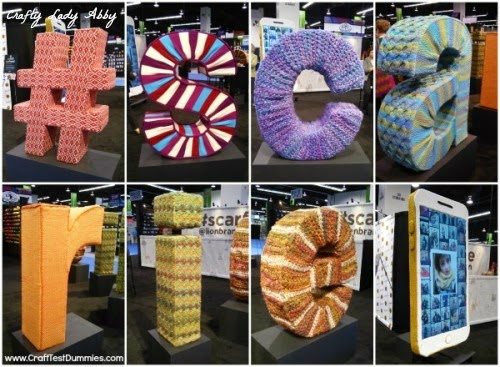 I checked out the I Love to Create booth, because I use so many Tulip products...and some of the staff are some awesome friends of mine. I took a rest and made a show lanyard with Pattie Wilkinson (Pattie Wack). While there I spotted Cathy Attix, so we chatted a bit. Then, we left and had lunch together. Later I came back to see Kathy Cano-Murillo, Alexa Westerfield Wolf, and Maya Murillo. I tested out some new products. I'll touch base with them later to play with more products. Thanks to Jennifer Priest's husband for taking this photo of us. It's amazing to meet them all in person, vs only on the internet. I traveled a great distance to get this opportunity to document the show and didn't want to miss out on a little personal time too. I've been teaching a weekly class since September, where we've been using many Tulip products to create artwork. If you aren't familiar with them, definitely check them out. They have great products for altering fabrics and creating your own designs. 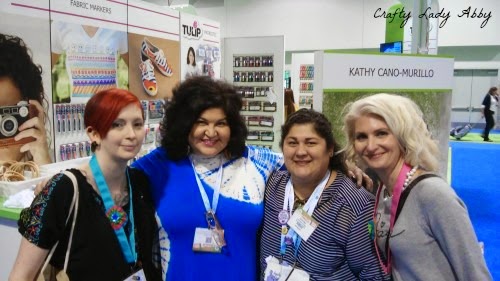 Over at Rit Dye, I found Angela Daniels who showed me some of the projects and new products. There were 3D printed chess pieces that had been dyed. If you aren't familiar with 3D printing, it's an important new technology to check out. In the Maker world, it's the hot item, so seeing it in the crafting world is great. One of the designers had sliced, dyed, and hung wood to resemble wind chimes, but in a row. I plan on testing this out at my own home. They have a new thermo-reactive dye for synthetic fabrics. I tested that out and made a flower. 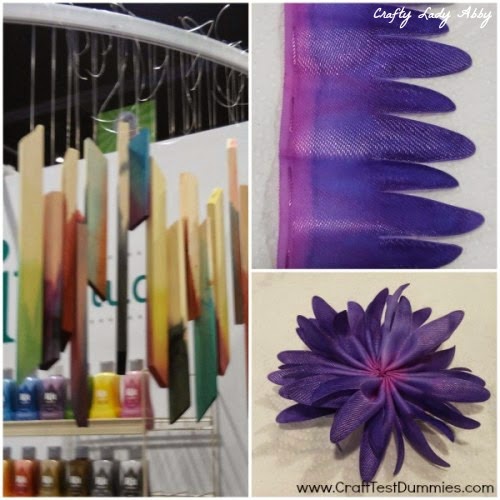 Over at Plaid, Cathie Filian gave me a tour of their new products after I had roamed around the booth and checked out them myself. I use a lot of Plaid products from paints to Mod Podge in my regular crafting. I probably have all of the Mod Podge formulas. They are releasing a Chalky Finish Mod Podge which is ultra matte, a Chalkboard Mod Podge that can go over paint and wood, making anything a chalkboard. They have a chalky finish paint line, Folk Art Home Decor, complete with wax, an antiquing glaze, and tools. I'm hoping to test those out soon. Early tomorrow morning Jenny and I will attend a Plaid media event, which we'll get a better look at the new lines. 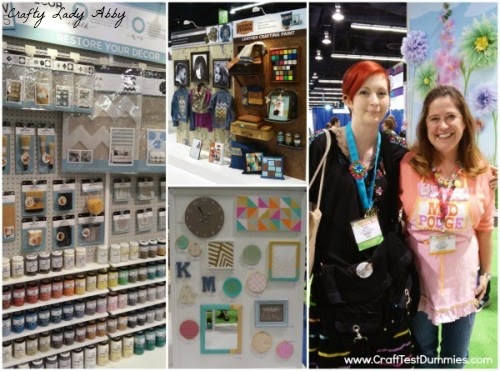 To finish off the day, I swung by the Fairfield World booth to see the booth I contributed items to. I got to see Amy in person. I'd met Niki the night before, after dinner with the Craft Test Dummies team. I made a strips curtain and purse for their booth, though the curtain is really for another thing. I got to see the new packaging for Oly*Fun. I'm really digging the pre-cut strips, long rolls, and squares. They have some new multi-packs, which is what the curtain is promoting. More on that much later. I got to meet the owner, who is a really nice guy. They are the great company to work for, and I'm really enjoying designing projects for them. The money I earned working for them, helped pay for my plane tickets and food expenses. Craft Test Dummies covered the hotel, which was nice of Jenny. 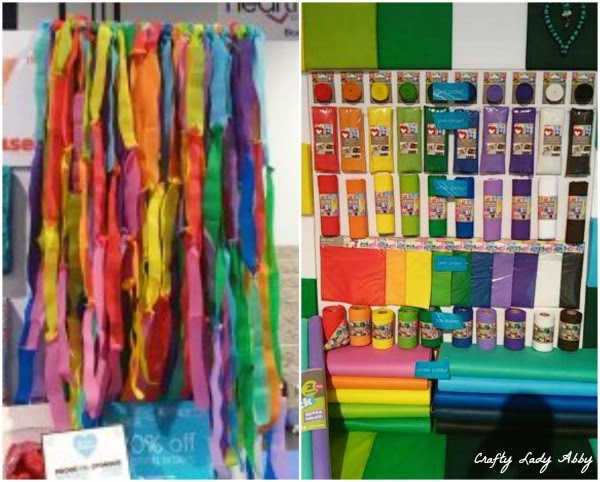 Now it's about 10pm California time, but about 1 am East Coast time. It's been a long day and I've seen some wonderful things and hung out with some of my favorite people. I'll have more posts about other things I've seen. The show is HUGE, so there is a lot of ground to cover and things to see. I took a lot of photos of other booths too, but these were my top ones today. More tomorrow. For tonight, I'm ready for bed!

(A version of this is cross-posted to Craft Test Dummies. I was going to write more photo heavy articles for them, but without going into detail, she settled for this style.)
Email Post
Labels: Beadalon CHA 2015 friends Hazel and Ruby I Love to Create knitting Krylon Lion Brand Yarns Liquid Nails Lumi MD Hobby and Craft painting paints Plaid Crafts Rit Dye Spinrite Yarns travel Tulip