This week we spent time with friends, overhauled our bedroom, bought some furniture, played dress up, enjoyed some animals, and hung some art. 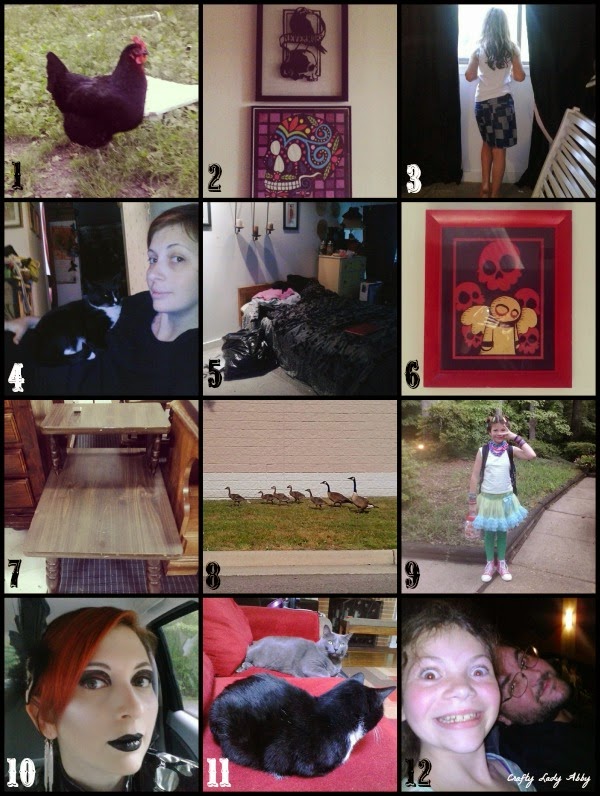 1) Sunday, we went to our friends' house for a cookout. They have several chickens. The new black ones are referred to as the "goth chickens". I got to pet a few, as others bribed them with corn. Much softer than expected. I don't know why I didn't expect them to be extra soft, as I work with feathers for many projects.

2) Before the cookout, I worked on hanging up artwork. The top is Quoth the Skull by my friend Noah Scalin. The bottom is my Cut Paper Sugar Skull, which is the 1st piece I did to share on Skull-A-Day. There is a tutorial for it here. The Quoth the Skull image is what got me involved in the Skull-A-Day project, and is also my left arm tattoo.

3) Monday was Memorial Day, so school was closed. I had Alex help me clean my bedroom. While cleaning, I found some old clothing that fits her. She's wearing a skirt that I used to wear before I had Alex.

4) We moved the bed, so this is the last look at how it was positioned, before it was moved.

5) This is the new position of the bed, which is closer to the window and more centered. The three dressers were moved to where the bed used to be, so they fill the wall.

6) I hung a cut paper artwork that John made me a few years ago. I had to repair the paper backing, which had to set up overnight before I could hang it. It's hung above the chaise lounge part of our couch, which is normally where I sit.

7) Tuesday, I decided we needed side tables by our bed. After school, I took Alex to Goodwill, and we found two matching side tables for $8.25 each.

8) Wednesday, I was working on organizing the bedroom. I headed to the nearest Dollar Tree. That shopping center has a small lake that is really a runoff for rainwater. Ducks, geese and other water fowl like to hang out in the pond. I saw 3 families of geese with goslings. This is the largest family and the best photo I took.

9) Thursday, Alex had a presentation on Japan. I dressed her in Decora fashion inspired by the people in Harajuku and surrounding cities. The day before, we went by the Vietnamese market, which had lots of candies. I found these wacky flavored vegan jellos. I remember them from college when we had a fashion show with Japanese snacks and treats, so I bought them. They were a hit at school.

10) I had a photo shoot with Heather Addley, for new League of Space Pirates head shots. I cut my hair dramatically shorter since the last photo shoot, and that's how I've looked the entire time we've done Live From Space. This is my makeup for that shoot. I cleaned our bedroom for the rest of the day. I took Friday off and spent most of the time watching Murder She Wrote on Netflix.

11) Saturday, Alex removed most of the cat hair off the sofa. The cats immediately protested. Later that day, we had a baby shower for my best friend. She's due with her 2nd child soon.