This week was full of skull artwork, friends, family, love, and League of Space Pirates. 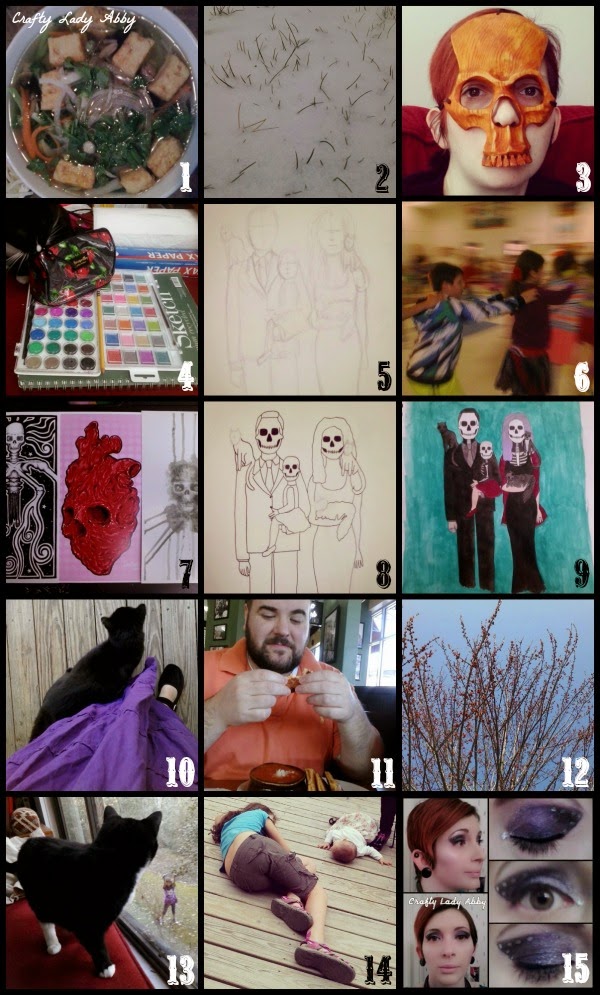 1) Sunday, after band practice, we went to Vietnam Garden for some veggie pho. It's hard to find a place with good veggie pho. This place is great.

2) Monday, we had a light dusting of snow. It wasn't enough to close school, just delay it a couple hours. Spring is already kicking in, with the grass and flowers growing.

3) Monday, this hand carved wooden skull mask arrived from Robertas, of Wooden Skulls. It's payment for his Skull-A-Day contest coming up in April. I don't always share the things we get as compensation for promotions, though they are all awesome. This was so amazing, that I wanted to wear it and show it off. I put it in my china hutch, with other skull artwork. Oddly, the cabinet has no china, but mostly tea sets and skulls.

4) Tuesday, I got my watercolor and drawing supplies together to make a gift. Sophie always needs to inspect what I make.

5) I sketched out the concept for the family portrait I was making.

6) Later, we went to Alex's last elementary school dance. This was the conga line as it went around the room.

7) Wednesday, I received a package from ARTmuffin and Monster Wash. Inside was the Bone Soap dispensers I was expecting, and these surprise prints! I love them. The soap dispensers are compensation for a Skull-A-Day contest promotion that starts next week. The prints are a nice bonus! I'm sharing the dispensers and two prints with the guys.

8) I inked in the family portrait. I made sure the skulls fit the face shape, for anatomical accuracy. I had to look up cat skulls, so those would look correct too.

9) Using watercolors, I finished the portrait, keeping in mind little details of the real family. It was their daughter's 1st birthday. Since most kids don't need much to keep them entertained, I figured something personalized would be a meaningful present. These are the Scalins...my friends Noah and Jessica, their daughter Zinn, and their three cats Panther, Shadow (Sophie's son) and Willow. I see them almost weekly, for band practice.

10) Thursday, I got a little Aurora love as I was leaving the house. I forget what we were doing...errands probably. Rachel had come to pick up Alex's toys we wanted to donate to her work, Extra Special Parents. Rachel is a social worker. She works with foster kids of all ages, to help them stay stable. We filled her car with toys. She brought Alex a wood easel, which was something I wanted to give Alex for a birthday present. One of things we gave Rachel was a Playschool easel Alex had grown out of. I hope the kids enjoy all the toys. We have more to give her. This gave us a bigger perspective on what it means for us to have too many toys when others barely have any. Alex didn't keep many toys. Mostly stuffed animals and Barbies. Rachel really wanted the Barbie stuff too. Maybe soon, as Alex gets older. I don't see her play with it much.

11) Friday, I went to lunch at Jason's Deli with John.

12) After lunch, I walked over to Dollar Tree for some inspiration. While walking, I noticed this tree had red buds. This is my favorite part about Spring, watching the trees grow more. Trees are beautiful year round, constantly changing and magical.

13) After school, Alex wanted to play outside. This is a cute moment between Sophie and Alex. Sophie isn't sure what to make of Alex being outside.

14) Saturday was Zinn's birthday party. She was getting sleepy at the end of the party. She laid on the deck. Alex laid down beside her, and they were intimidating each other. I captured this sweet moment. I remember when Alex was that tiny. She's almost 11 now...

15) Saturday night was the League of Space Pirates Live from Space episode 4. This was makeup from that night. I tried a new product that was much darker purple than expected, so it was hard to make the purple show up the way I wanted. I know what to do for next time. If you missed the episode, you can see it now on Ustream and YouTube.
Email Post
Labels: artist artwork cats drawing family food friends heart league of space pirates makeup mask nature skull a day 7.0 skulls snow trees water color week in review wood