This week, I worked on several projects, wrote a few tutorials, and spent some time with my family. 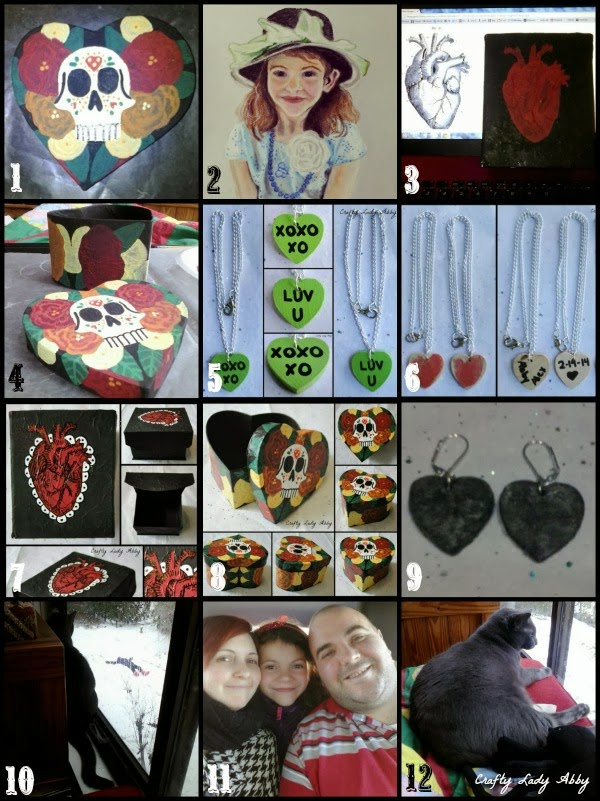 2) My friend Maria had drawn a portrait of my daughter. It arrived Monday. I need to frame it! I love having artwork done by friends.

4) Monday, I finished up the Dia de los Muertos heart box. I sealed it with Mod Podge matte, which gave it a low sheen.

5) Tuesday, I finished the tutorial for the Conversation Heart Necklace...

6) ...and the Fingerprint Heart Necklaces.

7) Wednesday, I wrote a tutorial for a Faux Leather Tissue Paper Technique. This is what I used to cover both of the boxes. This is the finished anatomical heart box...

8) ...and the finished Dia de los Muertos box, which I shared on Skull-A-Day.

9) I used the same technique to cover two wood hearts, and make earrings. These are dry brushed with silver, to bring out the texture. This is similar to how I created the LoSP Nerf Gun Box.

10) Thursday, we got snow. Alex enjoyed some time outside, while the cats and I watched from inside.

11) Friday was Valentine's Day. School was still closed from snow, but that didn't stop us from enjoying the holiday together. John spent some time with us too. We went to get lunch at Noodles and Co. Then, we went to see the Lego movie, which was surprisingly good.

12) Saturday, I forget what we did. However, I'll end this post with a photo of my cuddly chubby cat Pippi.
Email Post
Labels: anatomical artwork cats family hearts jewelry skull skull a day 7.0 snow tutorials valentine week in review