This week, I spent most of the time organizing craft supplies and transforming the downstairs into a creative area for us to enjoy. There is still a lot of work to do, but it's looking much better. The former "Craft Room of Doom" will be decluttered and turned into a sewing room. I don't sew much, and need to protect the fabric from Sophie, who likes to pee on fabric. Also, it will be a safe place to store my sewing machines (hough one is currently broken...hoping to fix it and give it to Alex) and dress forms, without worring about who will touch them. I have a lot of toys to donate, which will free up some room and I can make more progress. I'll take more photos as I go, because I know other families transition from kid to family spaces. The downstairs was Alex's playroom, but was mostly a huge mess because she had more toys than she could handle. Now it will be a family space. My mom's piano from when she was a little girl, is down there. Eventually my family's (my parents and bros) old kitchen table will move downstairs to become a craft and game table. We have someone who will make us a nice dining room table and benches for a great price. Anywho...lets stop rambling about house stuff and get to the photo break down... 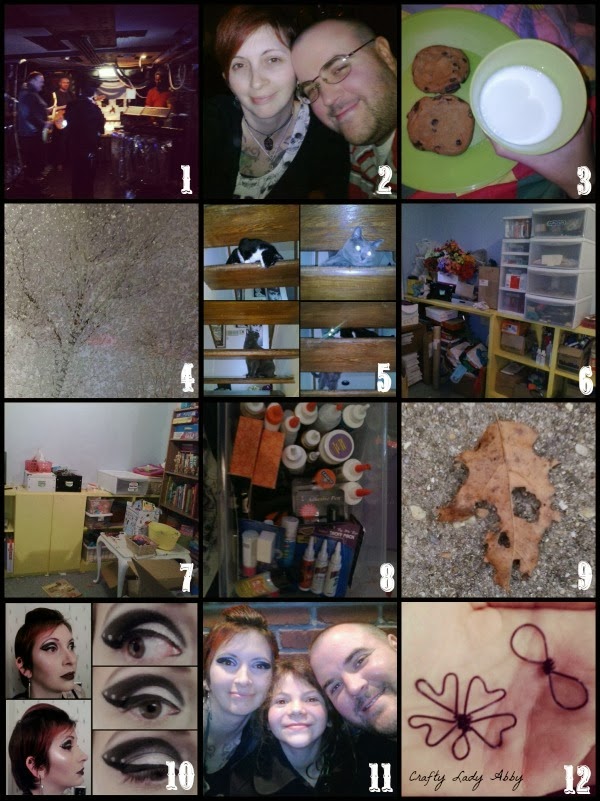 1) Sunday morning, we met up for band practice, so we were prepped for our next episode on Saturday.

2) Sunday evening, John treated Alex and I to endless cheese and chocolate at The Melting Pot as a postponed Valentine's day treat. We've been going here a few times a year, since we started dating almost 13 years ago. We've been married for 11.5 years.

3) Monday, As our Valentine's Day treat for John, we baked cookies. I haven't baked cookies in a long time, so these were crispier than intended...but we have another batch of dough to bake too.

4) Tuesday, we woke up to hail. It was only on the cars and wood by the time we saw it. This is my front windsheild from the outside, so you can see the tree reflection. I love these sort of photos using nature to create something unexpected.

5) Tuesday, I finally got good photos of the cats playing the Stair Game with me. We have slotted steps (as you can see). The cats love looking at us throught the slots. We tap on the stairs and rub the cats as we play a form of tag. We played this a lot, as they were fascinated with what I was carrying down stairs, and that I was on the stairs so much. They help by keeping me smiling.

6) By Thursday, we'd made a lot of progress. Alex was a great help at carrying boxes and sorting her stuff. This is the left side of the built ins...

7) ...and the right side. I hope to put more shelves along this wall, so I can store some stuff that doesn't get used as much. I didn't include the photo of the otherside of the room...because that looks rough, even though it's organized.

8) Look, I organized my glues! So nice to have most of them in one box. I'll need another box to hold my hot glue stuff, but for now, I could only find one gun...and all the hot glue. The big bottles are on a shelf between the boxes of paint.

9) I found anther skull leaf while walking up the path to my house. I put it on my porch table, but I need to put it with the other leaf. This was a hard photo to take, as my neighbor's cat Aurora was rubbing me and mewing while I was trying to photograph the leaf.

10) Saturday night, League of Space Pirates had our 3rd episode Infinite Loop. This is my makeup for that episode. You can watch the live episodes on Ustream when they air. Noah puts them up on YouTube a few days later. You can see the other two episode...No Winter in Space and Infestation on our YouTube channel.

11) After I got home from the broadcast, John took us to O'Charley's for dinner, since they have lots of fish options. I changed my outfit, but kept my makeup on.

12) Saturday morning, I had played with wire, so I was prepped for Chroma's Crafty Chaos later that evening. I demonstrated how to make the infinity sign. If you watch the Infinite Loop episode, you can see why.

That is all for this week. I hope to get more progress done on the creativity room soon. I'm trying to get the house in a better state for ourselves. Also, one of my best friends is pregnant with her 2nd child. I want to have her baby shower here, since my house is big enough to hold a lot of people...though currently it's holding 3 people, 2 cats, and lot of clutter.
Email Post
Labels: baking beauty cleaning crafts family food league of space pirates makeup nature organizing skull week in review wire