This week was a mix of crafts, snow, the start of a trip, and a big dose of family. 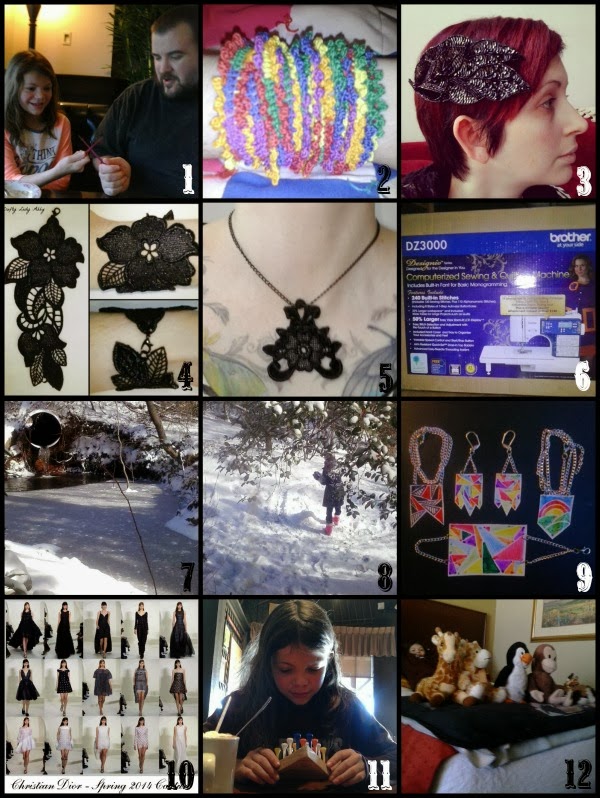 1) Sunday, we went to Maggiano's for a leisurely lunch. Since we sat in the bar area (which is more secluded than the main dining area, and just as nice), we kept getting little swords through the lemons of our drinks. Of course this meant we played with them.

2) Sunday evening, while John was at work I finished up my crocheted rainbow wrap bracelet. I'm going to change up this pattern and making one in black. This turned out a lot longer than planned.

3) Monday, Alex went back to school, so I worked on some projects. I made this Beaded Applique Fascinator. It's something that I've wanted to make for a while. Very simple sewing to make something fancy looking.

4) I made this Lace Applique Cuff with some basic jewelry making skills.

5) I made this Lace Applique Necklace with some basic chain necklace making skills.

6) Tuesday, my new sewing machine arrived! John had ordered it the day before. We split the cost and that finished off the rest of my teaching money...which obviously means I need to teach more classes. Working on some concepts now. If you are curious, I chose a Brother Designio Series DZ3000 Computerized Sewing and Quilting Machine. It has a lot of features that will be fantastic for future projects. My old machine finally died, but it lived a great life at 9 years of use.

7) Wednesday, school was closed again due to snow. We got a few inches of snow. Part of the water from the run off pool to the creek, stayed frozen for a few days. There was a light dusting of snow on it. Alex took this photo for me.

8) I didn't want to go outside, but Alex wanted to play in the snow. She went out back for an hour, where I could see her, and moved a lot of snow around.

9) While she was playing, I played with white PVC and permanent markers to create some geometric jewelry. I need to finish a tie cuff that I started. Just need to sew on the ties to the colored rectangle.

10) Through the week, I worked on some Paris Spring 2014 Couture sets. This one is from Christian Dior. Thursday, I had a doctors appointment. Friday, I spent in agony, recovering from that a bit. Still trying to figure out what is going on inside of me. Not sure if I'll openly share that any time soon, since it's very personal, but hopefully it can be resolved.

11) Saturday, we left Richmond, VA before the sun came up. We headed to Tennessee to visit my extended family. Most of my family lived in Tennessee. Only my parents, younger bro, husband, daughter, and in-laws live in Richmond, VA. Even John has to travel a bit to see his extended family...but not the 8 hrs we have to travel to see most of mine. I say most...because some live in Georgia, Alabama, and Illinois, that I'm aware of. Anyway, we stopped for breakfast at Cracker Barrel in Wytheville, VA.

12) We arrived to our destination about noon. Alex sorted out her toys, and we left to get some lunch. Found a nice pizza place that made us a shrimp and pineapple pizza. Later, we met up with my parents, my dad's brother (my uncle), and his wife (my aunt) for dinner.