This is an overall look at what I did last week. I mostly stayed at home, since my car isn't working. However, that gave me plenty of time to finish a big project and work on many Pre-Fall collections posts. Being at home a lot also means more kitty company. They were very affectionate and cuddly while I worked on writing. They tend to hide when I'm working on projects, because of glue fume and glitter...though Sophie got a glittered tail and belly from rubbing over the Glittered Kitty Cat Flats while they dried. I still have to write the tutorial for the Monster Heels, but it's a massive one.

I also learned there is a way to use a break in writing long posts, so they show a "Read more here" type deal while on the default blog page, but the full post if you click that or the post title. This is pretty nice, since long tutorials tend to be well...really long, and the Monster Heels one will be. So will Week in Review posts, so I'll be using one of those breaks. I'm going to test if these work out nicely for email subscriptions too. This will encourage people to come to the blog to read content, and not give it all in an email. At least, that's my thought process...also, reading the blog default page will be cleaner, if you are looking for something and don't want to scan through several long posts to get to the post you want. Alright, onto my Week in Review... 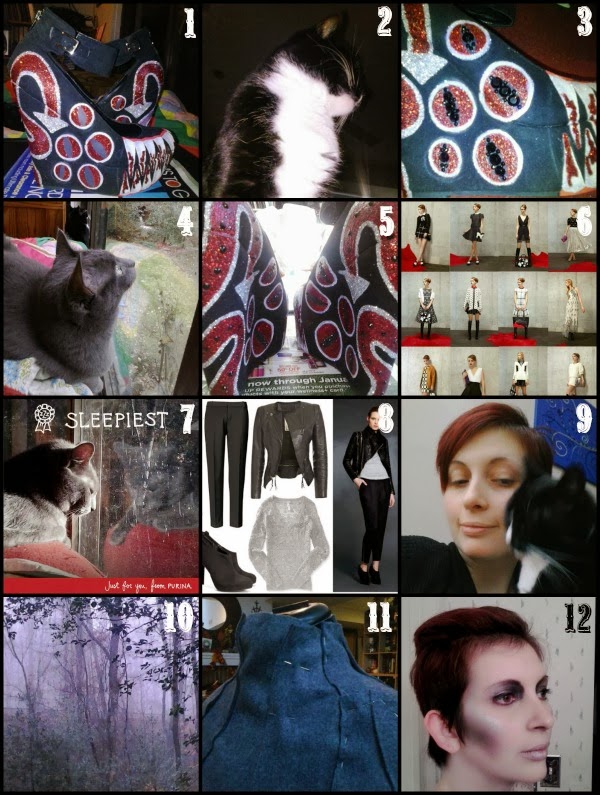 1) Sunday, I worked on the Monster Heels, adding glitter to the teeth, eyes, and tail. This was messy and had a lot of drying time. Lots of sealing and touch ups. Tedious, but well worth the effort.

2) Sunday morning, Sophie woke me up by standing on me. I love how her fur glowed from the bright sunlight.

3) Monday, I added "white" glitter (more like transparent iridescent pastels) around the eyes and on the teeth. I resealed the glitters. I added tiny rhinestones to the pupils of the eyes, on the outer sides of the shoes.

4) Monday morning, the furry kids joined me for some squirrel watching. The squirrels have been hanging out in the holly tree and eating the berries.

5) Tuesday, I finished the Monster Heels by adding dimensional paint spikes along the tails, the pupils of the inner eyes, and the jaw lines of the mouth.

6) Wednesday, I worked on writing many posts for Pre-Fall collections that I liked. This photo is of the Alice + Oliva collection.

7) Thursday morning, I look this photo of a sleepy Pippi and her reflection, which I shared on Instagram, Twitter, and Facebook. Purina follows me on Twitter, since I share my cat photos there...and other types too. They replied to my photo of Pippi with this cute overlay image.

8) Thursday, I worked on more posts for Pre-Fall collections, including some designer inspired looks. I love showing how people can deconstruct designer looks with existing pieces. The designer pieces won't be available for a while, so it's neat to show how people can wear a similar look now. This image shows a Yigal Azrouël inspired outfit.

9) Friday, John worked from home, so I was able to borrow his car. I got my hair trimmed.

10) Saturday, I woke up to fog outside. I love how it looked along the train tracks.

11) Saturday, my parents picked up Alex for a sleep over, at their request. I worked on my costume for the Nuclear Winter event later that evening. I cut a 1/2 yd. piece of grey fleece into long trapezoids and triangles. I draped them on my dress form, and created a caplet. Since Fallout was supposed to be cold, I wanted to be prepared. Sorry, I forgot to take photo of the full outfit...I really should have. I wanted to make a piece that would work the event and also something I could wear again. This is will keep my neck warm like a scarf. I made it close with Velcro, along that edge you see the horizontal pins.

12) This is the makeup look I created for the event. I meant it to look frozen, but ended up looking androgynous. That's not a bad thing, just unintentional. I was told, as compliments, that I looked like Annie Lennox and David Bowie (Ziggy Stardust). The hair style is also similar to theirs...which was a rescue from a mohawk that didn't look as awesome on me as I thought it would. I love playing with dramatic makeup. The sides are harder because I used cream eyeshadows 1st before adding powder. This was an experiment that didn't go as planned. Lesson learned...stick with just eyeshadow, for a more blended and softer look. After being told I looked like two people I admire, I'm going to attempt to recreate some of their eye makeup looks.