I spent most of the week sick, because my husband likes to share...his sickness. However, I did a few projects, wrote more Pre-Fall 2014 posts, watched a lot of Hercules, took long naps, and snuggled the cats while wondering how long I would feel terrible. 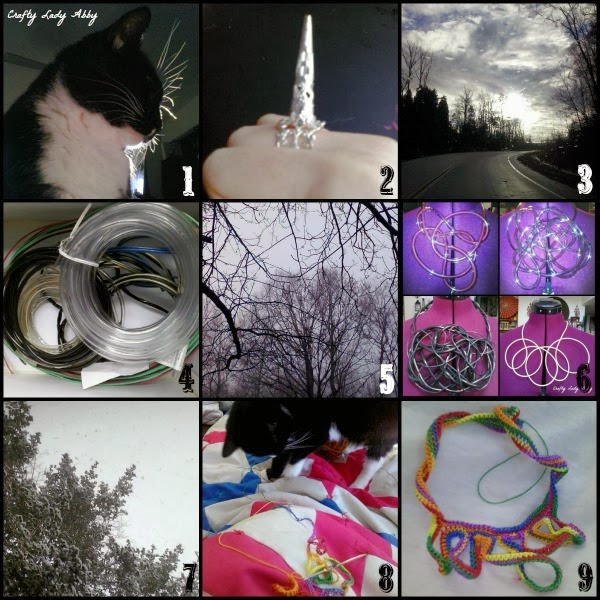 1) Sunday, I was woken up by Sophie, standing on my chest and rubbing my face. There are worse things to wake up too...like cat butt in your face. Alex was with my parents and John had to work. I was exhausted from a night out with friends...and this was foreshadowing for being sick the rest of the week.

2) Monday, the filigree ring bases arrived. I made one of the spike rings. I'll demonstrate this on this Saturday's League of Space Pirates episode "Infestation". I'll also write a tutorial for it afterwards. They are easy to make. I'm still waiting for the other style of ring bases to arrive, so I can show you all an easier spike ring.

3) Tuesday, I captured this photo on the way up the main street by my house. I was on the way to Lowe's to get red electrical wire for necklaces.

4) This is my box of electrical wire and water tubes that I've had for years. I decided to finally make some Unconventional Necklaces out of these.

5) Wednesday, we woke up to fog. I took this photo while waiting for my daughter's bus to arrive. I like playing with the trees in photos. These are across the street from each other.

6) These are the for Unconventional Necklaces that I made from electrical wires and water tubes. I'll probably rework the black one, to be lighter looking and more wearable. I made the 1st two on Tuesday, and the 2nd two on Wednesday.

7) Thursday morning, we woke up to snow. It was a light dusting, even though it started coming down in large chunks. It was all melted by noon. This was our 1st snow of the year. Hoping we get a heavier snow this year.

8) I had drawn a few necklace designs, when trying to come up with concepts for the wire and tubing. I had made the wire and tubing necklaces freeform, because the sketches were too structured for the materials. Friday, I decided that one of the necklace drawings would look good crocheted. Sophie "helped" me by attacking the rainbow (Mexicana) crochet thread as I pulled it off the spool. I made up the crochet design as I went, using the drawing as a guide for the style.

9) Saturday, I woke up feeling completely better. I finished crocheting the necklace. I still need to block and stiffen it. John wasn't feeling well, so after lunch and grocery shopping, we relaxed at home. I worked on crocheting a wrap bracelet with the rainbow crochet thread. I'm still working on that, adding picot stitches down the other side. They look like tiny spikes, which I like.
Email Post
Labels: accessories cats crafts crochet fashion jewelry jewelry making landscape league of space pirates nature necklaces rings snow spikes trees tubes week in review wire