Sorry this is a week late, but here is the week in review for the last three days of 2013, and the 1st four of 2014. I mostly worked on shoe projects, since my car is dead...and ironically now it's paid off. I was rainy and/or cold most of the week, so I didn't feel like dealing with getting it repaired immediately. 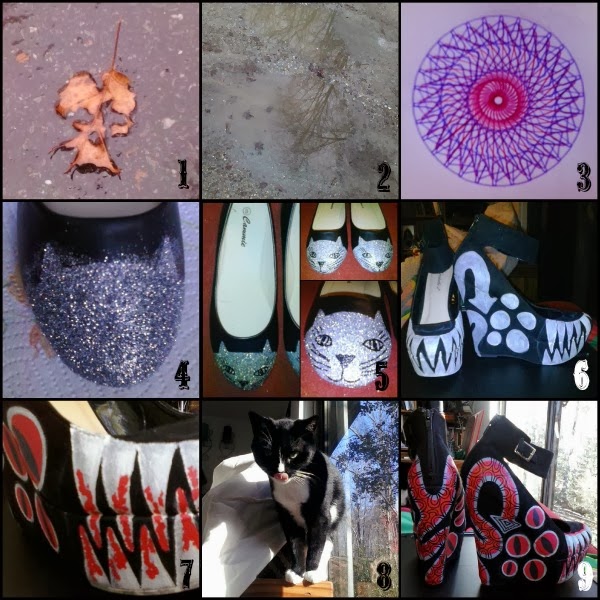 1) On Sunday, While walking to my car in the rain, I found this skull leaf. I was heading to band practice. I picked up this leaf, since it was still laying on the ground when I got home.

2) After breakfast on Monday, John took us to Pony Pasture to look at the raging James River. The road entrance had been under construction for over a year. It was recently finished, so we were able to go. This is a photo of a large puddle in the parking lot, which is a great reflective surface for trees.

3) On Tuesday, I showed Alex how to use her Spiral Doodle. It took a few tries until I found the right flow and shapes to make great designs. This activity kept her busy for a while. Later, we went to Mekong with some friends, and got Krispy Kreme donuts.

4) Since we were having the remainder of New Year's Eve at home, I started making Glitter Kitty Cat Flats.

5) On Wednesday, I finished creating and writing the tutorial for the Glitter Kitty Cat Flats.

6) On Thursday, since I had finished one pair of shoes, I decided to start making Monster Heels.

7) On Friday, I made more progress on the Monster Heels.

8) This is Sophie on Saturday making a silly face. The cats keep me company while I work on projects...well mostly Sophie, who is laying at my feet on the couch, while I write this post.

9) I spent a lot of time fretting over the tail on these shoes, which I ended up covering up on Sunday...but that's for the next post.
Email Post
Labels: cats crafts drawing flats glitter heels monsters nature shoes skulls Sophie tutorials week in review