This is my year in review. I wanted to do one of these since I started doing Week in Review posts. I'm starting to have memory problems, so the Week in Review post will help me keep track of progress and life. I take photos through out the year, but it's nice to have a full reflection on my year...well our year, since it involves a lot of people. We had a year full of celebrations, band awesomeness, personal goals, friends, family, travel, and of course art and crafts! 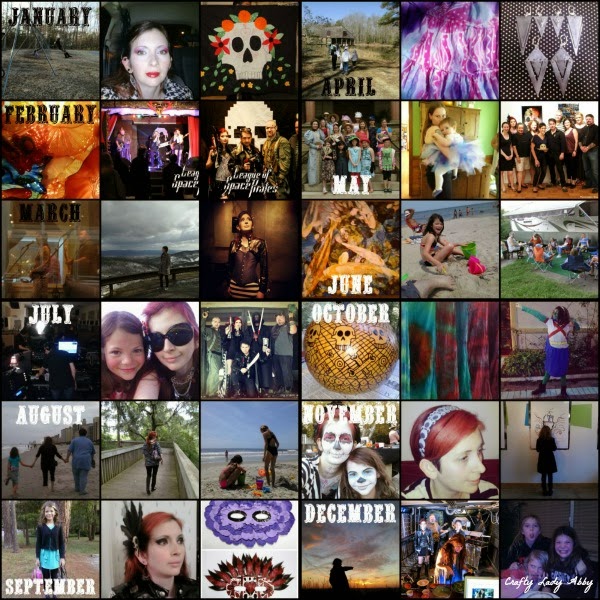 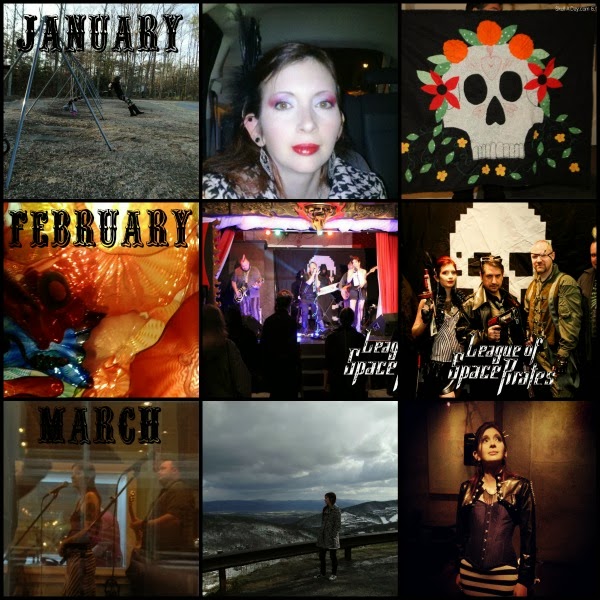 JANUARY
We started off the year in the company of close friends. My best friend Elizabeth taught Alex how to jump off a swing and fly. I took photos as Alex, Elizabeth, and Scott (her husband) took turns jumping off the swing.

A week later, we went to see Emilie Autumn with Scott and Elizabeth. I remember Emilie from before she was more well known, as a crafter and costumer. Love her music and look. This was the beginning of my playing with more dramatic makeup.

My dear friends Noah and Jess were expecting a baby, so I made them a Dia de los Muertos quilt and a bat adorned bag. Alex made Zinn (the soon to be born baby) a skull plush. You might know Noah as the creator of Skull-A-Day, so this was appropriate. This is the largest baby blanket that I've made. Noah is holding it in the photo. Jess loves skulls, but she also loves bats, so the bag was mostly just for her.

FEBRUARY
John, Alex, and I went to see the Chihully glass exhibit at the VMFA. We got in trouble for laying on the floor and looking up at this amazing sea themed glass sculpture ceiling. It's a "see it in person" thing.

Our band, League of Space Pirates, was a featured guest at VA Comic Con. We did a meet and greet photo booth with attendees.

Afterwards, we performed at the after party for the Comic Con, at Gallery. It was freezing, which made me rethink costuming.

MARCH
Our band, League of Space Pirates, was invited to perform 4 songs at WRIR, a local radio station. This is something we did the year before for the Spring fund drive. Since our band has expanded from the then 3 members to a well rounded 5 members, it was a nice chance to show off our new sound. My husband took this photo from the viewing room, where he was happily baby sitting 4 kids.

My little family ventured to Massanutten in Harrisonburg, VA, where my parents' timeshare townhouse is. I've been there every few years, since I was a toddler. We spent a week there. For the last two days, we were joined by my sister in law, her boyfriend, and her daughters. This photo is from the lookout point at the top of the mountain. We randomly found it one year, while exploring the resort. We love going back. It had snowed during our trip. We were so high up on this lookout point, that snow was lightly falling. Sort of a magical place that overlooks the whole resort and mountain ridges. Massanutten is in the basin of a U shaped mountain ridge.

Our band, released our Book and Record album. We had a release party at Balliceaux. Our full length album is currently being mixed, and will be released next year. We have big plans to make it different than other albums, since we aren't a traditional band. Lots more on that when the time comes! 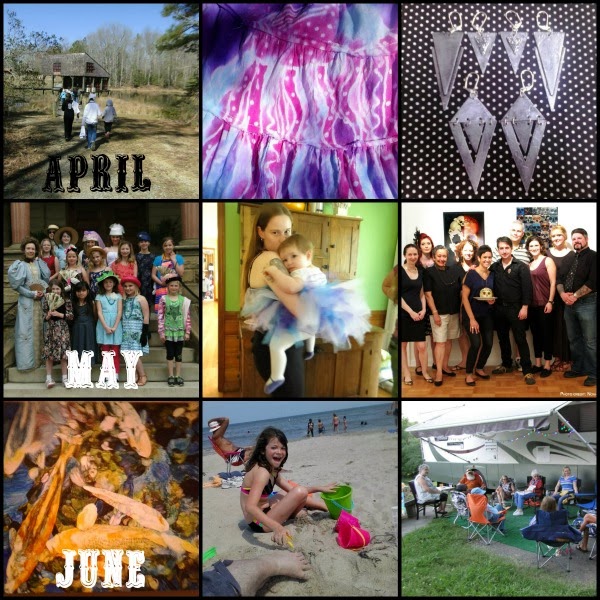 APRIL
At the beginning of April, I accompanied my daughter's girl scout troop to Camp Kitty for a very cold weekend. I normally camp in June, on the rare occasion that I do...and I haven't since I was 17. It was a fun experience, despite the cold. I cooked several dozen eggs one morning, the girls did crafts and games, and there were many camp fire songs. It's a great camp.

Not shown is my younger brother's 30th birthday dinner at a favorite Mexican restaurant. My daughter convinced him that they should wear sombreros together. I figured that was too embarrassing to share a photo of.

I met up with Elizabeth and Rachel one weekend to do a tie dye session. I had applied a resist medium to a skirt, to create jellyfish. I wanted to learn how to use dyes, as I hadn't played with them since college. That was a fun day. I finished the skirt later with fabric markers, to make the jellyfish stand out better.

I made a necklace and 3 sets of earrings from old Walmart gift cards. This was the beginning of my year long obsession with upcycling weird things into fashionable items. It's something I'm going to focus on in 2014...and likely for the rest of my life.

MAY
Alex turned 10. We celebrated this milestone by having a fancy Victorian tea party at Maymont's Dooley Mansion. The girls got a carriage ride, tea and desserts, to make fans, to wear fancy things (vintage accessories loaned by the mansion), and tour the mansion.

Elizabeth and Scott's daughter Claudia turned 1, so they had a nice party for her. In this photo she is wearing the outfit her aunt, Scott's sister, got for her.

At the end of May, John and I took a road trip from RVA to Chicago, IL to meet up with Noah, Jess, Zinn, and Tatman (Justin Lovorn). We celebrated Skull Appreciation Day 3 at the International Museum of Surgical Science. We teamed up with Street Anatomy for this event. John and I enjoyed wandering around and seeing lots of artwork.

JUNE
I turned 33 and celebrated my birthday friends. Most people were able to attend the VMFA part, and some came to sushi. This is part of a favorite painting I saw there. I like to wander around different parts on each trip.

After school was finished, we ventured to Buckroe Beach in Hampton, VA, for a day trip. We used to live in Hampton, so this is our favorite more secluded beach to play on. We went to Joe's Crab Shack afterwards, for delicious seafood steampots.

Randomly, Alex and I decided to join my parents on a motorhome trip to TN to see our family there. Since it was a short notice trip, I didn't have much time to coordinate with our cousins to hang out. We did manage to meet up with a few family members at the camp site and have a picnic. 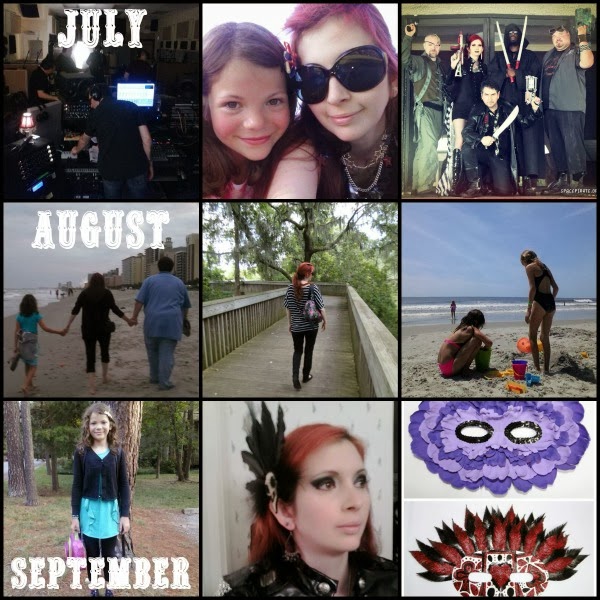 JULY
We worked on finishing up recording our full album. This is the band and Dan-O setting up to record "Firefly". This is the only recorded song with the full band. This will be an unusual album that shows the progression of the band's formation.

We spend 4th of July with our friend Rachel at our favorite spot. We had a picnic, which mostly involved desserts and enjoyed the fireworks. The traffic was terrible, so next year, we'll choose somewhere else to go.

Our friend Heather Addley did a photo shoot with our band, League of Space Pirates. We needed press photos of the full band in costume. We shot these at the Markel building in Richmond, VA.

AUGUST
Every August, my little family loves taking a trip. It was John and my 11th wedding anniversary. This trip was in Myrtle Beach, SC. We meet up with John's family. We spent a lot of time with our nieces, at Brookgreen gardens, mini golf, and various beaches. We played on 3 different ones...2 that were new to us. Next year, we'll probably rent a house.

John and I joined our friends for the annual Doomsday party at a favorite local club. We love getting dressed up in post-apocalyptic gear. I can't share any photos from the event, but this is a pre-party photo of me in my bathroom.

Noah and his sister Mica coordinated with the Chesterfield Public Libraries for me to teach a series of classes on Masquerade mask making. The theme was Alice in Wonderland. I created these 2 masks as examples. The purple one is after the talking pansies. The 2nd one is inspired by the cards. This was the 1st time that I'd taught something in person where I had to come up with the lessons. I learned a lot and it was a great experience. 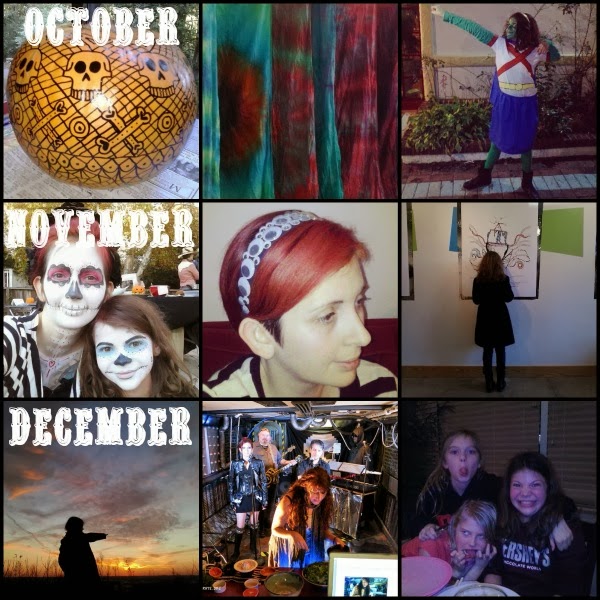 OCTOBER
For Halloween, Dia de los Muertos, and Skull-A-Day, I used a paint pen to make a papel picado inspired pumpkin design. This is still sitting on my porch, not rotten. Perhaps due to our weird weather...or that it's on a covered porch...or that I really love pumpkins.

At Art 180, I started teaching a series of classes for wearable art. One of the classes, we explored dyeing clothing. I selected some cotton scarves for them to dye. I gave them some basic instructions, and they did the rest. I took the scarves at home, so they could process overnight and I could wash and dry them. This is a photo of half the scarves hanging to dry after I rinsed them. The other half hung in Alex's bathroom.

Alex requested to be Miss Martian from Tiny Titans for Halloween. I made her this costume and painted her face green.

NOVEMBER
Alex and I attended a Dia de los Muertos party at Noah, Jess, and Zinn's house. Alex and I decided to do skull makeup.

A few days later, I decided I was tired of having long hair. I went to see my friend Amber one morning, and she cut it for me. I normally wear it to the side like this, but it's cut symmetrically, so I can wear it back like Pink does.

Before Thanksgiving, we had a fashion show at Art 180 for my students. Another class had their final show during the same event. They had worked on creating a coloring book. The teacher had the images blown up large and hung on the walls. Alex happily spend most of the free time coloring this image.

DECEMBER
Alex and I went to our friends Jenn and Nathan's house for the annual Friendsgiving potluck. This was the 4th one. The 1st one started a monthly potluck event, with different themes and people. On our way to their house, we saw this incredible sunset. We stopped at a park that overlooks the river, and took this photo.

After months of working on creating a space ship set, our band had our 1st broadcast from space. This is a photo of us standing behind our friend Jenn while she makes a delicious Kale salad. I had some at the potluck and it's the most delicious salad I've ever had. If you missed our 1st episode, you can watch it on YouTube and Ustream.

We got to spend a lot of time with our nieces. Alex had 3 sleepovers with them. This photo is of the girls at Mekong. We treated my sister in law and her little family to dinner, as a Christmas present.


That is all for 2013. There were a lot of creative stuff that I didn't include, but you all know that I make all sorts of stuff through out the year. I have a lot of tutorials and projects that I'm working on. I hope you all had a good year, and have a fantastic one, starting tomorrow!
Email Post
Labels: crafts family friends league of space pirates my life teaching travel week in review year in review