Yesterday was Mother's Day. I tasked my mom with finding some favorite photos of her and me, and email them to me. I had a few, but there are boxes of old photos at my parents' house. My parents spent the day looking through them, scanned their selections, and emailed them to me last night. I meant to post this earlier today, but I had some project things to do. Anywho, let's get on with the family photo sharing.


This is my mom at 28, in front of my parents' new house, pregnant with me. I was born late Spring, in June 1980, so this is probably late Winter or sometime in Spring. I was my mom's 1st pregnancy, but her 2nd child. I have an older brother who is adopted, and 5 years older than me. I'm sort of the miracle child, because though my dad and her desperately wanted to make a child, they weren't able to for years. Then, they stopped trying, focused on getting this house finished, and shortly after they moved in, I was made. 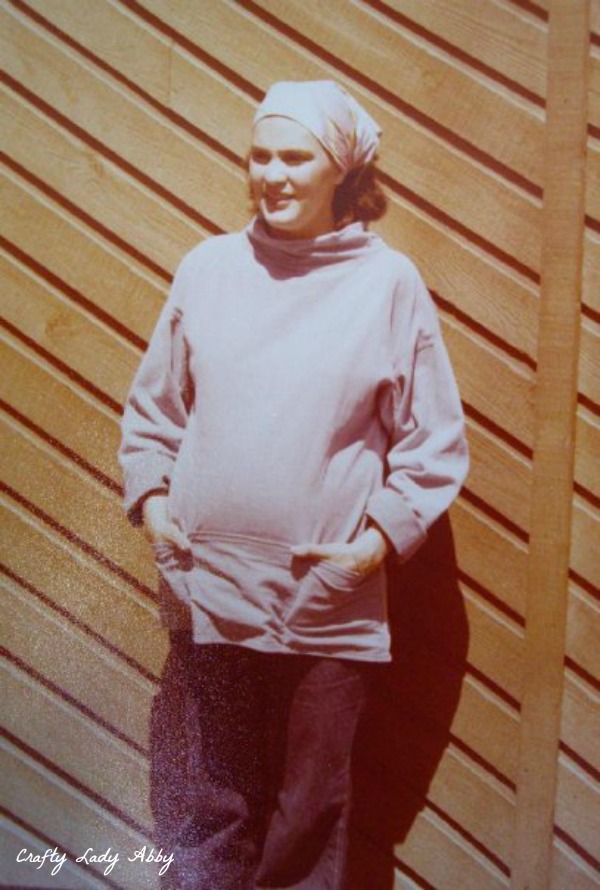 Fast forward a few years... This is me at Halloween one year. I was about 2 or 3, I think. The bunny costume is one that my mom made. She had made a few costumes. If I recall correctly, she had made this one for my older brother (the vampire you see peeking behind our mom) when he was little. We all wore it at some point, when we could fit into it. I have a younger brother too (who you will see in the next photo), who also wore the bunny costume...or maybe one of the other ones she made. She's one of the main reasons I love making costumes. We always had awesome Halloween costumes. She probably would have helped us make all of them ahead of Halloween, had we not become the last minute costume planners...a skill that still comes in handy now. My parents also loved dressing up for costume parties. My favorite costume memories of them are when they cross dressed...but as you will see in a moment, that is especially funny with my dad. No, you won't see him in costume too, just what he looks like. We might leave a drag photo for a Father's Day post...if I have permission from him, and there is a good photo. He has silly costumes. While we're on this photo, let me draw your attention to my mom and those boots. I loved those boots for years. I don't think she still has them, but she loved wearing them and I really wanted to as well. She's always been a very stylish lady in her own way. She's an artist too, but that shouldn't be a surprise. 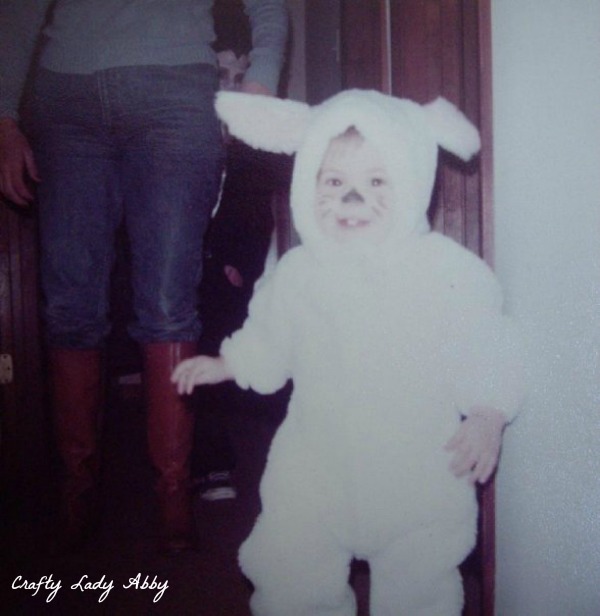 I mentioned that younger brother. This is him shortly after he was born. He looks very small, so I was probably still 2, but close to 3. He was born in April of 1983. I don't recall anything from him being a baby, other than the day he was coming home with my parents, and that only involves not being allowed to paint a banner with my grandmother and then 8 year old brother. 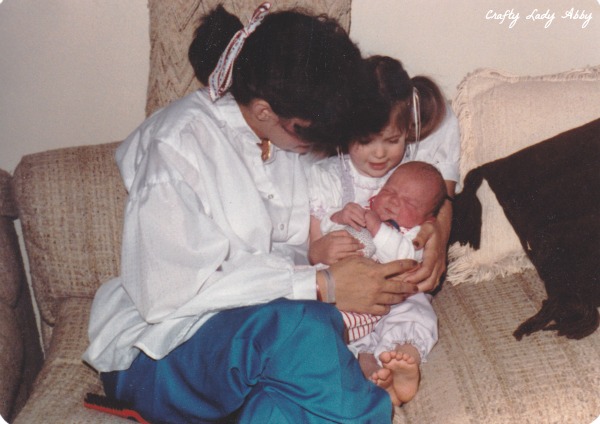 You probably immediately notice my brother has a diaper on his head. This was a clean one and he probably put it on his own head. When ever he gets married, I'm showing this to his wife...just so she is aware of the type of kid they'll make. My mom's legs pretty much still look like that. My hair style says that mom played with it. She LOVES playing with hair. My daughter often comes back from her house with her hair done up in some way. I didn't mind her doing my hair. I had a perm for 7 years and she was amazing at making it look great and not a horrid frizzy mess! Until she broke her arm a few years ago, she used to help me dye my hair when I needed a touch up. I have to do it myself now. It's not as fun. She still gives me hair products she didn't like, on occasion. She also used to do my younger brother's hair. There was that time when Sun-in was cool and they used lemons and the sun to lighten his hair. 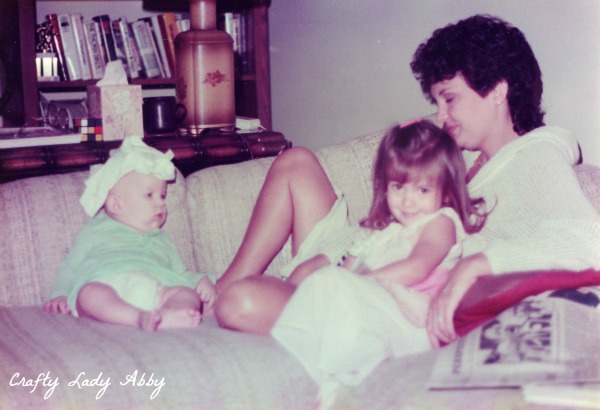 According to my parents, I was 2 in this photo. You younger people might not recognize who I'm dressed as, but you older ones might. For this particular Halloween, I dressed as Raggedy Anne. My grandmother had made me a "My Size" Raggedy Anne doll. I used the doll's clothing for my costume, with the addition of a long sleeve shirt. I reused the pinafore a different Halloween for a Strawberry Shortcake costume. Again, you younger people are probably used to the reboot versions of her. However, the classic version is more classic doll like. Though we still have the doll, most of the clothing has gone missing. 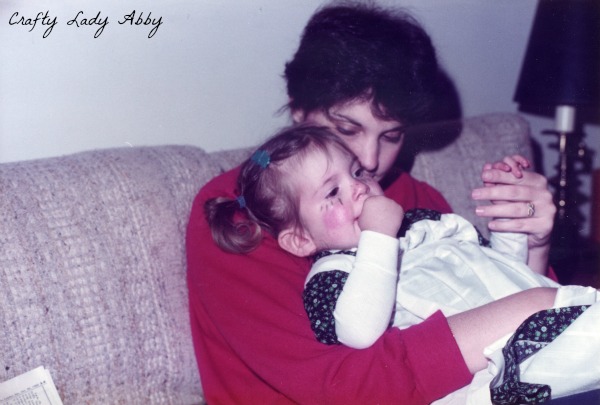 This is from one of our many family vacations in Avon, NC (the Outer Banks). I have a few fleeting memories of vacationing here. My dad likely took this photo of my brothers, mom, and I. I'm thinking this was in early Spring, since we are all wearing hoodies while on the beach. I can assure you that my pockets were packed with sea shells...much to the delight of my mom. 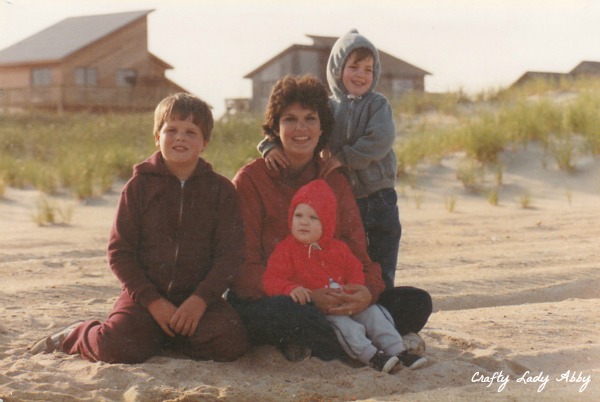 This is likely from another vacation. We used to all get in bathing suits and get in hot tubs or Jacuzzis together. It was a lot of fun. I don't know where this was or who took the photo. We used to take vacations with other families and my mom's extended family. That made the vacations more memorable (seriously those stick out in my head more) than just with my little family. Also, our extended families live far away from us, so mass vacations were great times to bond with each other. 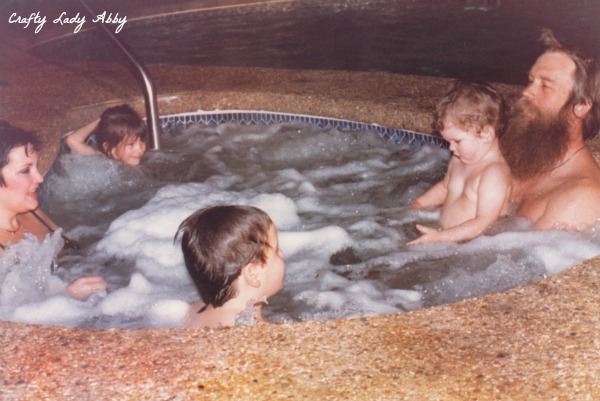 Though I mostly remember vacations with extended family and friends, this is a little family one that I have a few memories of. We went to DC for something my mom had to do. I recall going to the zoo, but not much else. I do remember this outfit and how much I loved it. I don't recall how old I was, but probably about 8. My older brother was a teenager by then and my younger one was probably school age. I've been to DC many times since this 1st trip, because it's only 1.5 hrs from Richmond, VA with no traffic. 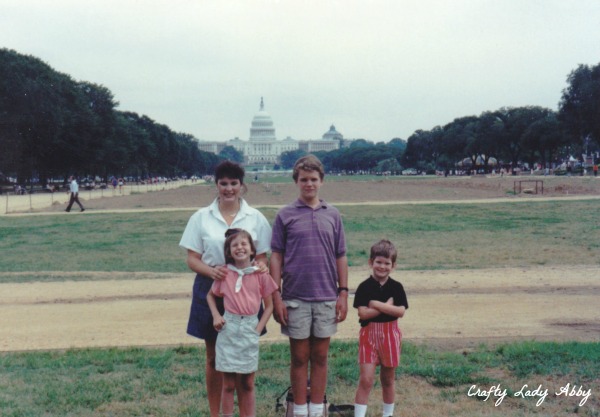 This is a rare peek into my family. I'm a private person, because though I love my family, we've been through a lot. I'd rather enjoy the happy things, than discuss the unhappy ones. My parents and brothers are all very creative, though I don't know if my older brother still makes artwork, as we don't talk often and he lives in TN. I was raised in a creative and chaotic household. For that, I've become a stronger and more adaptive person. Though I'm a creature of habit, I love trying new things and playing with materials in wacky ways, just like my mom does.
Email Post
Labels: family