Friday a little frantic robin woke us up early by tapping on our front windows. I don't know why it was freaking out, but it tapped on our various front windows for about an hour. Still, we leisurely lounged around the house and ate breakfast for a few hours till about noon, when we decided to go play at the local children's museum. 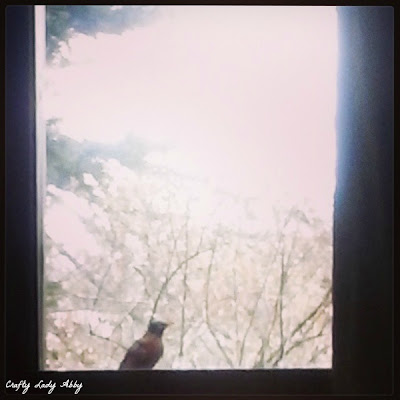 While at Explore More Discovery Museum, we did a lot of playing. While John was getting the oil changed, Alex and I went to the museum, where he had dropped us off. He was to meet us there afterwards. Surprisingly the mechanics changed the oil, added wiper fluid, and vacuumed the front inside of the car in about 10 minutes.

Alex and I 1st went to a specimen room that had various small creatures encased in resin blocks. While she was looking round in the little room, I got busy making a skull on the light table. I couldn't resist. This skull is made from arachnids, insects, amphibians, crustaceans, and a seahorse...what is a seahorse? After this room, we wandering into a building room. There were several foam planks that Alex took to building with. I spotted this vertical light box with holes for these translucent colored cylinders. Since it was just the two of us in this room, I rearranged the cylinders to make a skull. It's really rough, but still pretty good. I had to fight off (gently) a 3 y/o who started taking it apart, as I was trying to photograph it. Alex thankfully distracted him with an offer to help her build. I let him take it apart when I was done taking photos. 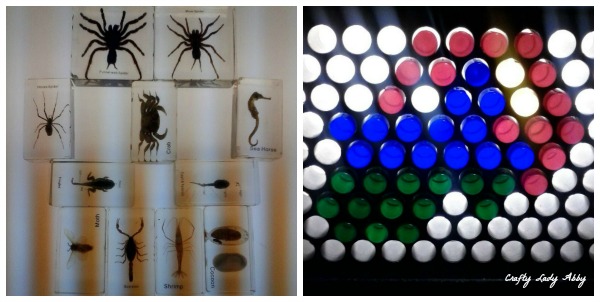 Alex built this thing that resembled at TARDIS more than any other structure. My fellow Whovians will spot the likeness to our dear Doctor's Police Box. She did climb inside it, which amused us both. After John joined us, we meandered around playing with various things. Alex fixed me up in the back of an ambulance, in the medical area. In the theater, she painted her face like a kitty, and did a short version of the Wizard of Oz with some other kids, where she and another girl were the wicked witches.

My favorite room, of course was the medical one. There was a massive game of Operation available, and a magnetic skeleton to play with. So much fun!!!

We were getting hungry, so we went looking for somewhere to eat. John was in charge of the food for the trip. He'd chosen Finnigan's Cove, which is withing walking distance from the children's museum. When we 1st walked in, I doubted his choice, because the front is a very smokey bar. However, the back is sectioned off for non-smokers (per the Virginia law, all restaurants and bars must be either non-smoking, or have two separately ventilated sections. Most places have chosen just to go non-smoking. Even though the bar was relatively empty, the stench from years of smokers, was intense. The back was nice and the food was very yummy. Alex and I both had crab cake sandwiches and cups of she crab soup. I had my sandwich blackened (which is spicy) and Alex had hers grilled. John had a large bowl of she crab soup.

Our favorite shop Downtown Books was within walking distance from lunch, so we headed over there. They do have a lot of books, but I love their huge selection of old post cards. I found a lot of  great ones to add to my massive post card collection. I mostly have ones of celebrities, but I bought a few floral and artwork ones to create an inspiration board. I paid about $10 for 23 postcards, which is a great deal! I'll work on a haul post to show you this week, so you can see the ones I purchased. There are a lot of great gems!


Afterwards, we went back to the house and got prepped for the waterpark. $100 later, we were inside the park. We all went around the lazy river 3 times, then in a little pool for a bit, until Alex wanted to go on the slides. John and I stood around while she did that, and I noticed my freshly shaved legs were burning. The water in the park had caused an allergic reaction to my legs. I had to go rinse my legs in the shower, to help stop the burning. By then, I'd had enough of the waterpark, and declared it a waste of money. Alex had a blast though. Next time, we stick to the pools.

Afterwards, we were hungry, so instead of going back to the house, we drove to Long John Silvers for fried fish and shrimp, and Cookout for milkshakes. We were still in wet clothing, but we didn't care. We went back to the house, changed into pjs, ate dinner, and played Angry Birds until we were too tired. This was a very busy day, but we like to pack in as much into our last vacations days as possible.
Email Post
Labels: children children's museum doctor who food Massanutten medical skeleton skull skull a day 6.0 travel Virginia