Wednesday, we decided to take a day trip to see Grand Caverns and meander back to the house. The scenery to and from was gorgeous. Besides the occasional town, it's all farm land out here. The bottom left image, you can see some cows, with Massanutten mountain in the far distance. 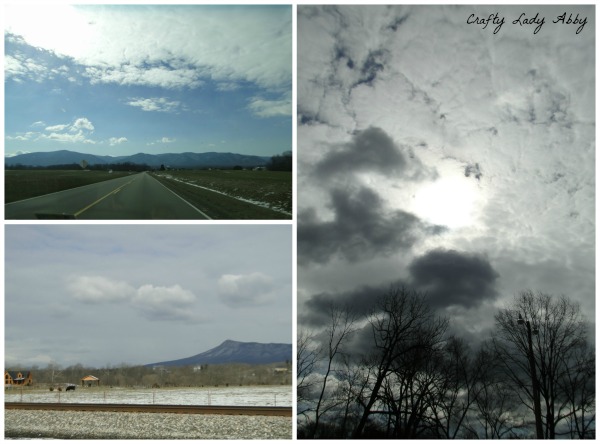 Grand Caverns has less tourist traffic than the more known Luray Caverns does. We're ok with this, because it means there people and dead sections of the cavern. This one was special because it had a lot of shields and was obviously turned 90* over time...thousands of years. There were cracks in it along the sides, and textured stripes along the ceiling in many places, which indicates those minerals were horizontal at one time. I used the twilight setting on my camera to take all of these photo of the caverns. This setting takes 6 photos rapidly, and combines them into on. This is to take in as much light as possible in the area I'm photographing. I dislike using flash in low light areas like this one, as it can ruin the effect of the area.

They had many lights through out the caverns that our guide would turn on and off as we went through sections. This top photo shows a lighted section behind a darker section. Sort of skull like...which I'll share soon on Skull-A-Day. I find the best skulls when traveling. The next photo is of a man-made (not sure when) reflecting pool. The clear, unmoved water, reflects sections of stalactites on the ceiling. The grouping you see is supposed to look like the NYC sky line by plane. The next photo is of the rainbow room. They have colored lights set up, and reflecting pools around it

Of course, we couldn't resist taking photos of each other in the caverns. Our guide, showed us how dark the caverns were without light, and with just a candle (an electric one for this example). This cavern was found about 200 years ago, and there have been tours of it pretty much since then. People commonly would tour it with only candles to light the way. 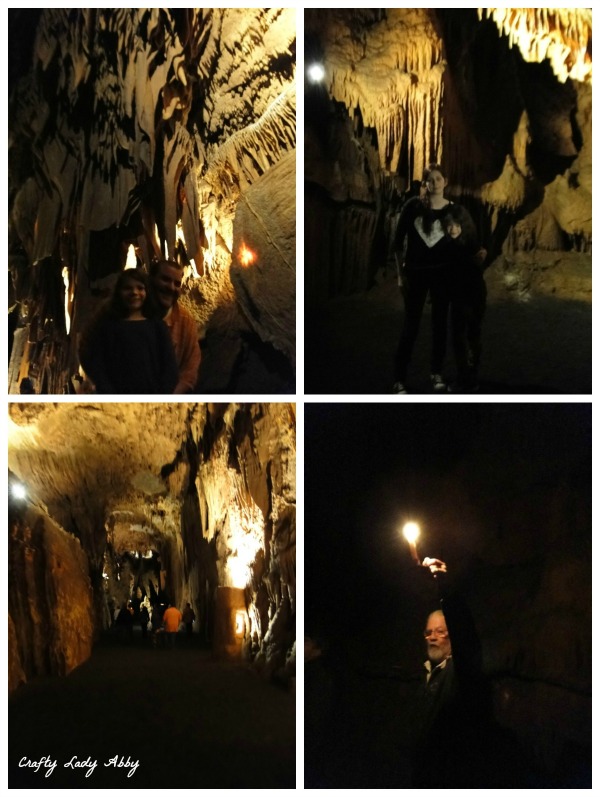 These are some of my favorite formations and photos from the many I took. The top left is showing the highest part of the cavern. From where we were standing to the top in the eye shaped section is over 1000 ft. The next image is of a calcium deposit covered structure. It reminds me of a giant ice cream sundae. The next photo shows part of the textured striped ceiling that I mentioned earlier in this post. This particular photo also shows a break in the rock caused by an earthquake from a long time ago (not the more recent one). The last photo shows another structure also covered in calcium, and the eeriness of the lighted sections behind darker sections. Oddly, I didn't notice the skull shapes that this and the other photo created, until I was looking through the photos. Those images just add to the creepiness of being in a cavern. 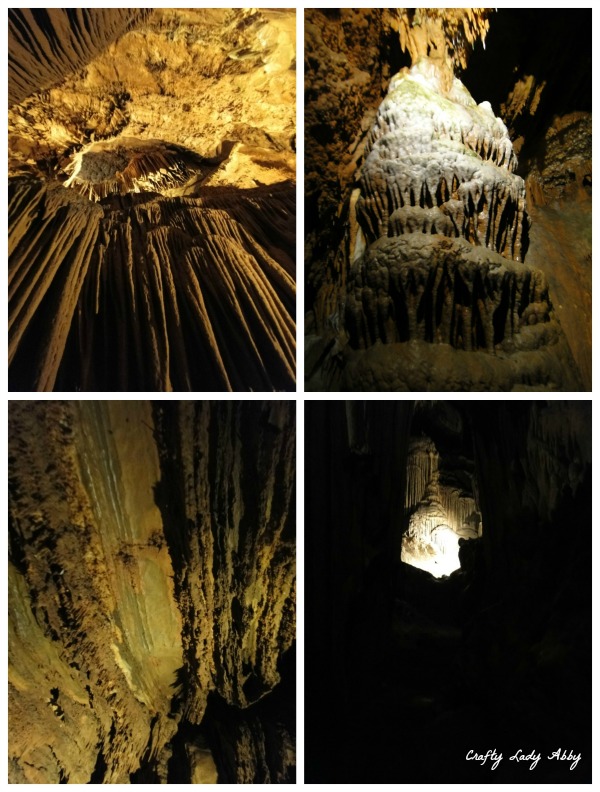 John and I have been on the look out for a groundhog to photograph. As we were walking back up to the main building, which housed the gift shop, he spotted this large dark animal behind it. We thought, "At last, a groundhog to photograph." I thought it was, until I got closer. I noticed it was watching me, so I didn't get very close. My camera has a fantastic zoom on it. Unfortunately, when I zoomed in, I saw it was a rather large CAT! I've never seen a cat this large! My mom said it's likely a Maine Coon Cat. Of course, now I want one, because they are so large. Imagine snuggling that thing! Don't worry, we didn't pet it. It's obviously a little pissed off...and possibly a bit wild. 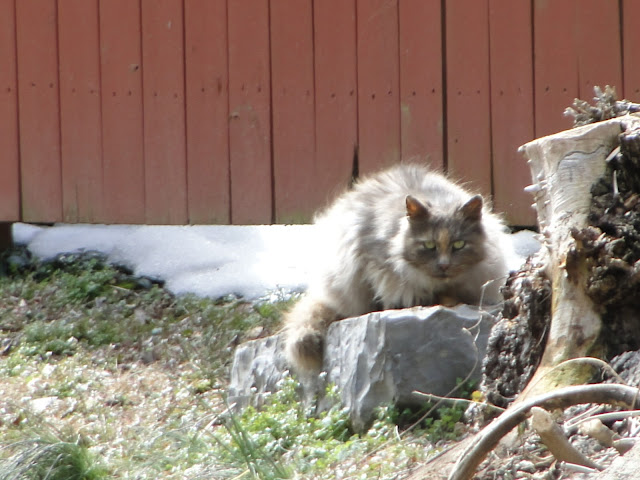 We went to the gift shop to buy a few goodies. We don't normally do this, as most touristy shops like this are way overpriced. This one was surprisingly inexpensive! We bought 2 small bags of rocks (we selected what we wanted from a large assortment) for $4 each. You can see mine here. My daughter selected her own. We bought 2 geode slices, 1 large purple and a smaller green, for $2 each! The last thing we bought is this bug necklace for $2. My camera has trouble picking up colors right. I'll photograph these better when I do a full haul of things we've purchased on our trip. The rocks are teal, clear, purple, pink, green, and black snowflake. The slices and some rocks will be turned into jewelry. The rest will sit on a shelf with some other nature things. 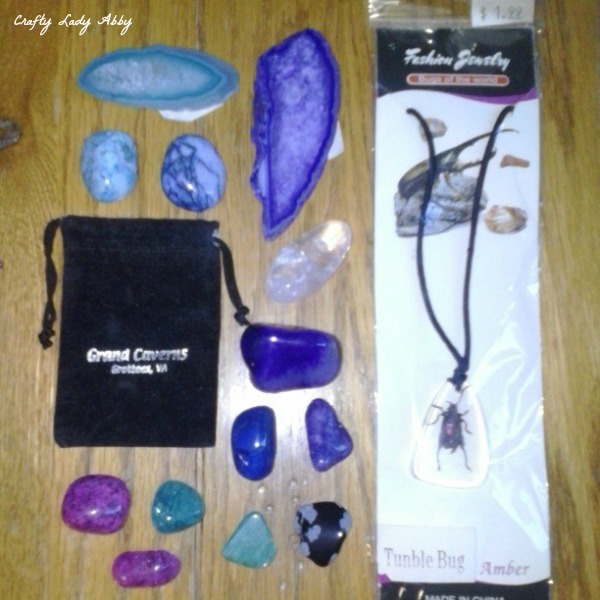 As we drove back towards the house, we made a stop at The Cheese Shop, which is a Mennonite owned food store (though the site says "Amish style"). They do have cheese, which we bought 2 kinds. However, what we bought the most of were spices, sweets, and snacks. These were super inexpensive compared to regular grocery stores. What cost us about $40 there, would have cost us about triple at a regular shop. The spices were in bulk, but it wasn't such a huge amount that we couldn't use them quick enough before they were stale. The snacks and sweets were in bulk too, but again, we'll consume them before they are stale...and really "bulk" isn't really bigger than a normal shop. It's more likely that they buy the things in bulk, and divide it into more manageable/saleable portions.

We came back to the mountain, and before going back to the house, we took a drive to our favorite place on the mountain, the overlook. It's not something many people know about. Years ago, we happened upon it when we were meandering around the resort. It is a nice spot to overlook the entire resort in all it's beauty. There is another little section we can walk up to look all around us at the other mountain tops to their valleys, but alas, there are so many trees that it's hard to take a nice panoramic. 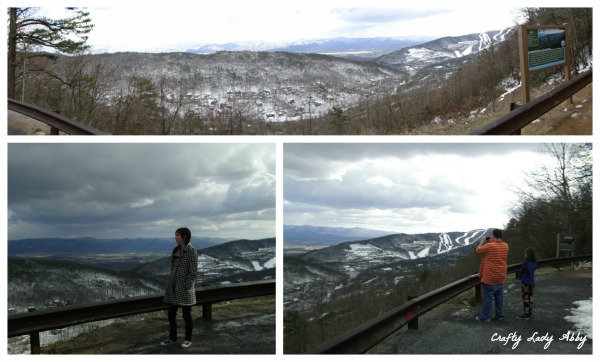 We just hung out at the house the rest of the night. I love how this day, I got to go below a mountain, and to the top. That doesn't happen often, and definitely a 1st for me in the same day.
Email Post
Labels: cat caverns crafts insects jewelry Massanutten mountains nature rocks travel vacation Virginia