Yesterday, we left Richmond, and our two furry babies to stay at my parent's timeshared townhouse in Massanutten, Virginia. We are staying here for a week. We have some loosely planned activities, based on weather and our physical energy. We have wireless internet, but it is very slow. I'll try to post at least once every other day. I brought my real camera, but for quick photos, I've been using my camera phone and Instagram to share some trip photos...mostly nature.

The cats were confused by our packing. Pippi (left) sat in the game bag for a while. She has a thing for bags and luggage. She sat on the suitcases too...as she loves to do daily if possible. Sophie (right) was rubbing on the laptop case, as I was prepping it to pack full of needed electronics. We have a trusted friend taking care of them, but they are incredibly shy and paranoid if we're not at home. They love to hide. Most of our cat sitters aren't sure if we have cats, but they see the food is being eaten and the litter box is being used. Our current one has a trick he likes to use...bribe them with soft food...that will get them out of hiding. 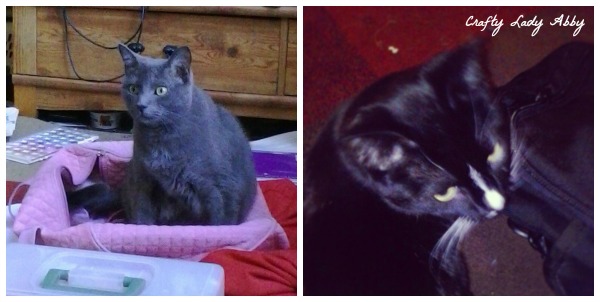 Massanutten is only about 2 hrs from Richmond, which is nice. When we arrived, the roads were clear, but the sky was cloudy. About 30 minutes after we got inside the house, thick snow started falling. We had to leave the mountain to get groceries for the week and eat lunch, so we went soon after the snow started. While in Walmart (the best place to get everything we needed for the week and always has the freshest produce in a small town), the snow accumulated a lot on our car. By the time we got back to the house, the snow clouds had obscured the mountain view. 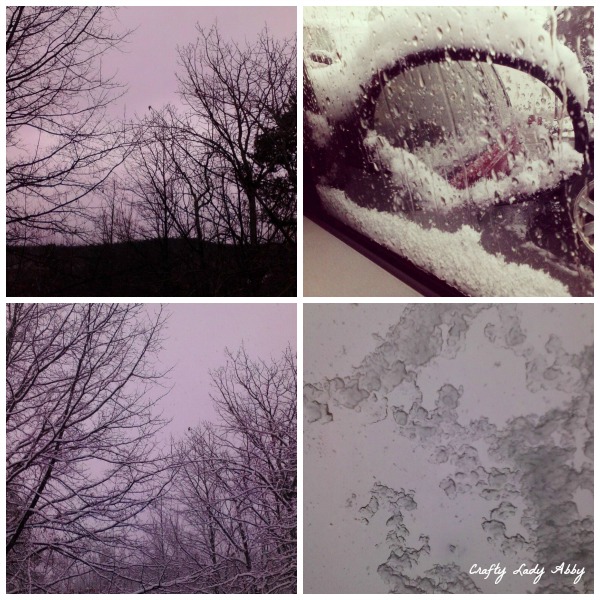 We woke up to this gorgeous view! The snow was pristine, with the exception of a few powder coated animal tracks. This is our backyard. 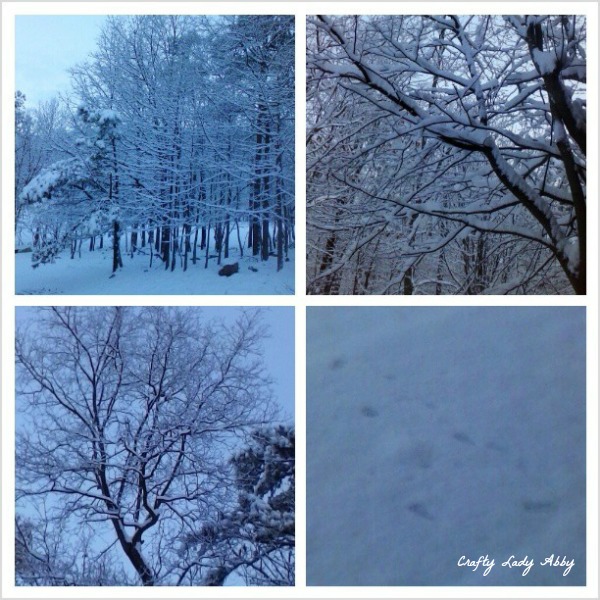 By the front balcony is a large pine tree. It was covered in thick snow this morning. John decided after several hours of lounging around and playing video games on the Xbox Kinect at the house, that he needed to go back down the mountain to explore...or something. I bundled up in my new hat, favorite sunglasses, layers of stripes, favorite faded black jeans, rainbow striped with black skull socks, sneakers, and trusty houndstooth coat, for this adventure. We tried to go shopping at an Amish market, but alas it was closed. We did see an Amish buggy and horse, so that was a bit of a save. We went to lunch/early dinner at our favorite Japanese restaurant, Kyoto, which was more fantastic and entertaining than normal. I swear this place puts on a better show while cooking our food than any other one we've ever been to.

Afterwards, despite me wanting to shop at favorite stores...Rugged Warehouse, Big Lots, Plato's Closet, and TJ Maxx, John wanted to go shopping at the mall. The mall here isn't very good, but he wanted to trudge around indoors...to "wake up" he said, but by the end we were exhausted, and I was tense. Shopping for clothing went terrible in general. I did find some neat things though. I'll do a proper shopping haul at the end of the trip, as John promised that we'd go to my favorite shops a different day...I really hope we get to, as that's where the hidden gems are! My favorite thing we found today were 25c super bouncy balls from a vending machine at Old Navy. We bought 4. That should be fun! I did manage to surprisingly find three neat lacy clothing pieces at Walmart (we needed a few more things that we forgot yesterday). I got a dress, a peplum blouse and a slouchy crop sweater...all black of course. At Target, I found two black wide strap tanks (one will be a painted ribcage tank for a personal need and a tutorial), a heart design slubby sweater (just like my skull one, but black with a white heart), and a grey thin long sweater (possible project with that too). I tried nothing on...and just hoped for the best. At a little funky dollar shop, I bought a silver skull bead bracelet, a white fabric fan (for another project), and a little spray bottles that are perfect for controlled spraying of dye or paint.

As we were heading back to the house, the snow clouds had lifted enough to reveal the mountain skyline. The moon also made a lovely appearance. We know that many deer live at Massanutten. As we got very close to our house, we came upon about 11 (that we could see and count) deer in various areas semi-close to each other. The one I was able to photograph with my phone, we let cross in front of our car, as we had accidentally separated it from it's small group. There were deer tracks behind our house, so they had been by us too. They are one of my favorite things to spot here. I'm hoping, despite the snow, that we might see at least one groundhog! They are so fat and lovely! 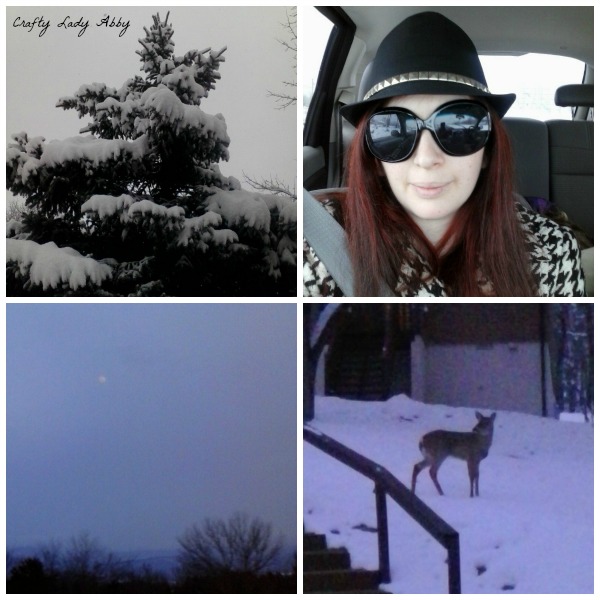