We had two League of Space Pirates events close together. The Book and Record release dance party was on Thursday night, followed by the WRIR radio performance for their Spring Fund Drive.


On Thursday, I wore a full costume and tried out a purple makeup look. Both were well received. In high school, I used to wear purple eyeshadow often, but never dramatic like this. Since I've been into dramatic makeup for special things, I wanted to experiment with a purple and silver eyeshadow look. As always, my makeup had glitter and shimmer to it which is hard to photograph, but looks fantastic in person. I used a lot of new products that I recently bought, as well as the purples from the ELF brights palette that I got after Christmas. I started with NYX purple and silver jumbo pencils for colored bases, to map out the colors. On top of that, I added silver Jane and purple ELF eyeshadows, playing with blending and layering. I used a little of Sugarpill's Bulletproof/black eyeshadow to deepen the bright purples in the outer corners and crease, since the ELF purple selections were only bright. I'm having a duh moment now that I should have looked at the purples from my old palette is that is darker. I'll check that selection out the next time I do purple makeup. I added purple roll on shimmer over the purple eyeshadows, and platinum roll on shimmer over the silver, to give it a nice sparkle. I also think the added shimmer helps visually blend the colors together. I did a basic black eyeliner...but forgot to do my mascara...another d'oh moment. This was my 1st time experimenting with purples in this way, but overall I'm happy with it. 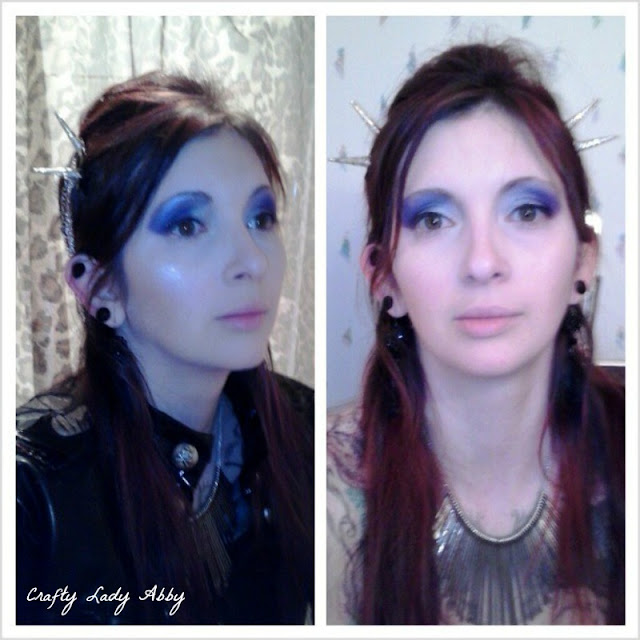 On Saturday, I wore a "space pirate light" outfit (a black/white striped maxi skirt, wet look leggings, a burgundy velvet tank, a black/white enameled metal necklace, and a black/white striped cardigan), but wanted to wear makeup, since there was a possibility we were being filmed. Glad I decided to wear makeup, as we did end up being recorded both in a live fee in the radio booth, and in the recording booth. I decided to play with a smokey black, grey, and silver dramatic look. I started with silver and black NYX Jumbo Pencils precisely places to create a certain shape. I applied silver (Jane) and black (Sugarpill) eyeshadows over the sticky bases of matching neutrals  Then, I decided it looked too harsh, so I added more silver across the brow bone, and a dark grey to blend the edges of the black into the silver. To add some sparkle, I used NYX roll on glitters in platinum (silvery clear glitters) and onyx (iridescent black) to help add some shimmer to the neutrals. I put black eyeshadow under my eyes along the lash line. I used more NYX silver jumbo pencil on a small flat brush along my inner eye and under my eye. With the same brush onto the silver base, I added more silver eyeshadow. I did a double liner in black and silver to add more drama. To my eyelashes, I added mascara to both top and bottom, and curled the top lashes. I love this look, but I can see how false eyelashes would make it pop even more. 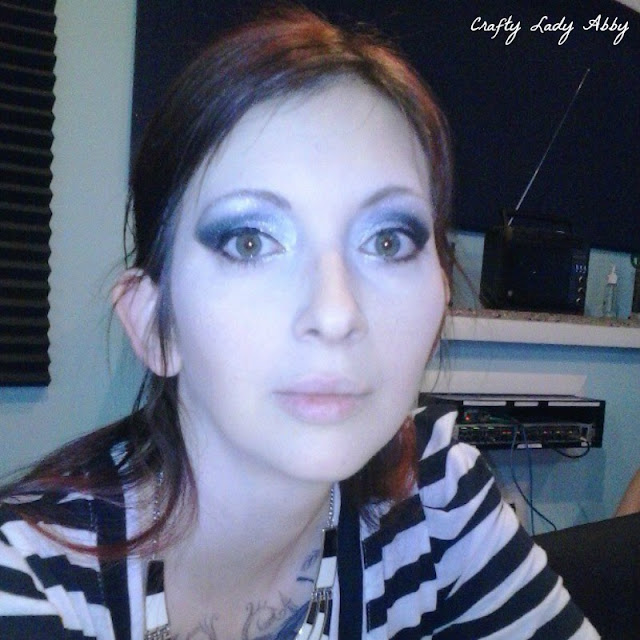 That is it for now. There will me many more dramatic makeup looks to come for various future things. I hope they keep getting better as I keep playing with the products together.
Email Post
Labels: beauty eyeliner eyeshadow glitter gothic league of space pirates makeup