This is an image from our League of Space Pirates meet and greet, and photobooth at the Virginia Comicon last Sunday. I'll make a more in depth fashion post when I get in the right mood to break down my costumes and upcoming gigs. 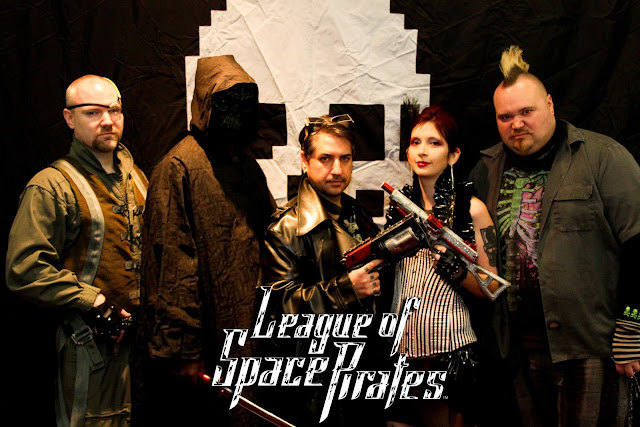 This is from our performance later that evening at Space Babes VS. Space Pirates. I totally flaked on getting a nice full body shot of my outfit for this, but thankfully as you can see, I wasn't wearing much. 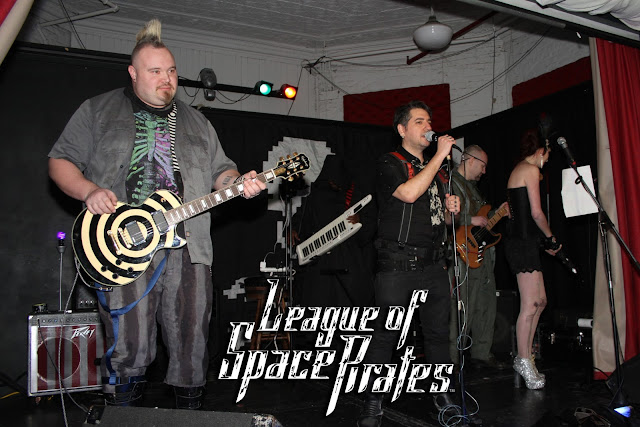 Anyway, more later when I'm feeling up to it. Noah and I caught something on Sunday and wiped us out for a few days. I feel MUCH BETTER, but still not totally up to writing long posts. We have a Book and Record release party on March 7th at Balliceaux, followed by a radio performance on WRIR 97.3 on March 9th which might have a live video feed. I'll do a separate post about those too, so you all can tune in to WRIR's internet radio option if you want to. Word is that we'll have a 2nd music video coming out around that same time. That one is animated by one of Noah's former students who mentioned wanting to work with us on a music video. Noah and I have some more video concepts on the mental drawing board that involve our mini space pirate crew...my daughter, Mike's son...and possibly Noah's baby after it's born and able to interact well. We'll be taking a break for a few weeks waiting for the baby's arrival and giving Noah and his wife time to adjust to a newborn. In that time, I hope to get some new products made...or at least attempt to be productive with something creative.
Email Post
Labels: league of space pirates update