Rummaging through my kitchen for more things to paint with, I chose three types of tea, and hot chocolate, for this skull. 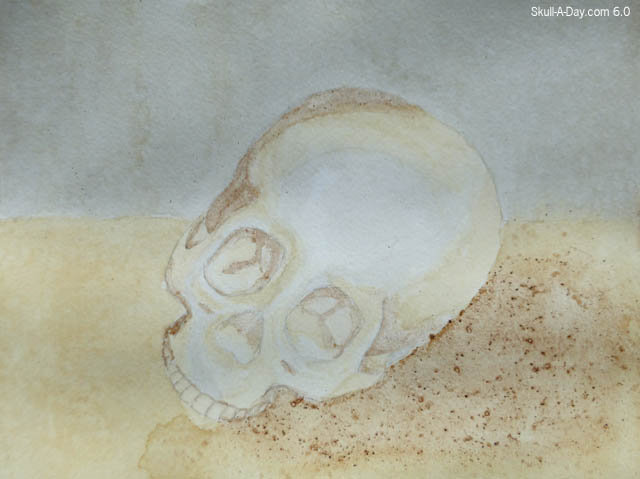 This was a fun experiment. I knew that the black tea (Lipton) would be light brown, and the hot chocolate would be dark brown. The raspberry tea is grey, though it's red-pink in the mug. The chamomile tea is a very pale brown, which was a nice surprise since it was more leaves than color in the mug. I sketched out the skull with pencil, then painted with the tea, like I would with water colors. This painting smelled great immediately, even when dry. The tea smell faded a day later, but the chocolate scent stayed.

You might wonder how I made paint from these items. It's rather simple. I took four mugs, and opened one bag into each mug, so the items were separated. Separately, I heated up some water in a liquids measuring cup, in the microwave. Once the water was warm enough, I poured a little into each mug, and poured the rest in the sink. I only needed enough water to make a concentrated infused liquid. If I had prepared the mugs, as I would to drink the liquids, then the "paint" would be too watered down and sheer. You will obviously have loose tea leaves, but I wanted this, as it adds extra concentrated color to the paper, when I painted with it. This is technique very similar to how I painted my #52 Skull Sculpture, but for that I used layers of just black tea to age it. The most easily seen variations are the bits of undissolved hot chocolate.
Email Post
Labels: chocolate dia de la abby painting skull skull a day 6.0 tea