LoSP: Costume Photos from May Show

On May 19th, 2012, our band League of Space Pirates performed at Gallery 5. If you are familiar with our band, from past costume and props related posts, seeing us perform, seeing photos elsewhere, or hearing our music, you know we are from the future (figuratively, not really) and our performance are in costume.

I had a lot of fun making this costume (well the parts I made...which is a majority of it). You might notice the thigh chain garter, and weapons garter from their tutorials. I've also worn this PVC mini skirt a lot of time...and it's wearing out after many years of love...and abuse. The rest (minus the leggings and the anatomical heart necklace) are new items. 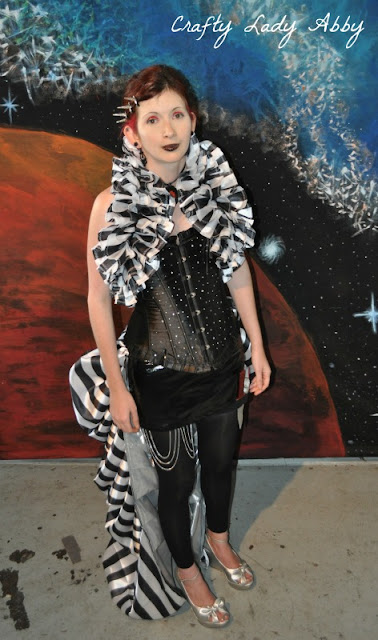 The 1st photo is before we started the event. If you look in the other photos, you will notice, that I'm missing the thigh chain. Turns out, it's not very sturdy. It kept falling down! The chains started coming apart too. Frustrated, I threw it in my costume bag and no one noticed. I made it because I tend to shake my right leg to the beat of the music, and I thought it would shake nicely. I think the weight of the chain caused it to fall. If I make it again, I'll make the elastic tighter and use less chain. I love the look of it, but for wearablity, it wasn't wearable.

I bought the corset on Ebay. It has little clear stones glued on...for which I accidentally picked some off while rubbing it. I have this nervous habit of messing with my clothing when talking to people. Unfortunately, that tends to look creepy...and I lost a small amount of stones. Not noticeable though.

I bought the gloves on Ebay. I wanted to draw attention to my hands. These are inspired by a pair of gloves Lady Gaga wore. There are little stones glued around the hearts. I didn't mess with these, as it would be noticeable if one was missing. They were very warm, but gave the effect I wanted. 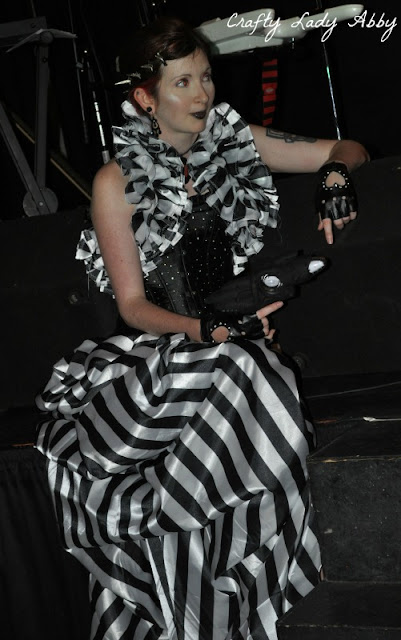 The ruffle shrug is a lot easier to make than it looks. It's 3 layers of long rectangles (two widths of fabric sewn together per strip/rectangle) with 3 different heights. I finished the raw edges on each long rectangle. I measured the length from the back of my neck, under my arm, across my back, under the other arm, and back up to my neck. I subtracted about 4 inches to account for tying it when finished. Then, I gathered the long centers on each layer to the length of the final measurement I took. Then, I pinned the layers together and zig zag stitched them together. After that, I cut a piece of black mesh the length of the ruffled rectangles and about 3 inches wide. I pinned it along the center stitch line of the ruffled rectangles, and straight stitched it on. I took two long pieces of ribbon and securely stitched them to each end of the shrug, so I could tie it. See, it's not that hard to make...tedious and time consuming, but not hard. I put it in my costume bag, after we finished performing. It was very warm.

The long bustle was the hardest to make. It is two 3 yr pieces of fabric, with the bottom edges curves. The top fabric is a striped satin. The bottom fabric is a silver lame, which is very delicate. I sewed together the bottom and side edges. I basted the tops together. Then, I gathered them to fit from one hip to the other. I took a 4 inch wide long piece of black cotton and created a waist band that also sealed in the raw edge of the gathered top. I added a parachute buckle, because those fit under my corset smoothly, and are easy to remove. Afterwards, I put the bustle on my dressform, and tediously pinned it up into a bustle at the sides. Since the fabric is 3 yards long, the bustling took a long time. I stitched the sides down securely, so no gaps could be seen where the bustle loops were made. Normally, bustling would be stitched into a flat front skirt. Because mine is a stand alone/deconstructed bustle, I needed to hide the loops by stitching them flat along the sides. After the stitching was done, I took a few small safety pins and bustled up the center. By using safety pins, I can alter the center bustling easily. This decription might seem easy, but the bustling was very hard. Doing one side is hard enough, but doing the other side to match was difficult. For me, the actual stitching is never as hard as the construction.

You will notice several spikes in my hair. I used decorative long bead caps instead of normal spikes. They are less expensive and lighter than normal long spikes. I wrapped the ends around a long black alligator clip. Then, I used a little bit of E600 where the ends overlapped inside the clip, so they wouldn't move. I clipped it over the edge of a wax coated paper plate, so it wouldn't glue shut while drying. I did this for each "spike clip".

The light created pattern you see across me in the below photo, is from the projection that my friend Camille created. The particular pattern is from Noah's Skulladelic image he created for Skull-A-Day when he was still doing his 1st year of the project. She used various images and animations to create visual texture across the flag. This particular stripey design, also gave us some "visual texture".

This isn't the best photo of me, but it is a decent one of my makeup. I wanted red sparkly eyelids that lasted all night. In order of application, I used Urban Decay's Primer Potion, Sugarpill's Love+ eyeshadow, Too Faced Shadow Insurance Glitter Primer, and Ben Nye's Aqua Glitter in red. I applied the 1st primer with my finger, like normal. Then, I used a small angle brush to carefully apply the other layers of products. This lasted a long time. I lined my eyelashes with silver liquid eyeliner that I bought at Hot Topic. I used Clinque's Naturally Glossy mascara to finish my eyes. For my lips, I used Rimmel's Stay Glossy lipgloss in Black Diva. It can be worn over a colored lipstick, to make it darker, or on it's own. 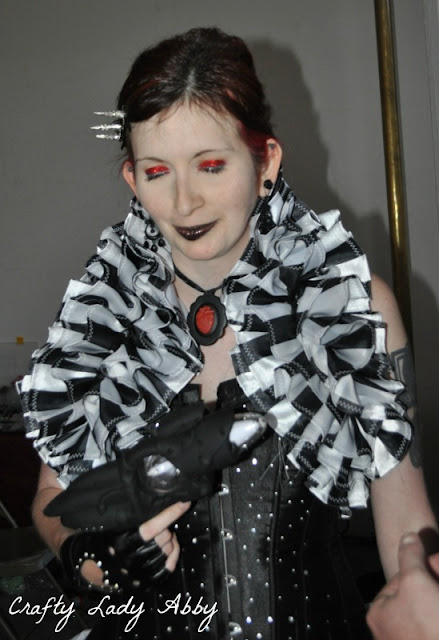 The Nerf Gun Box I made, worked perfectly on stage. It looked great, and worked well for the added drama of selecting a gun. The box contained both of the Nerf Maverick guns that I paint modified. If you look behind us, you will notice a pirate flag. This flag is huge. I made the flag based off of the League of Space Pirates logo that Noah designed. It was a long and tedious process...made harder by two lovely rotten cats who constantly wanted to wrestle on the fabric while I was pinning down the skull and crossed bones. 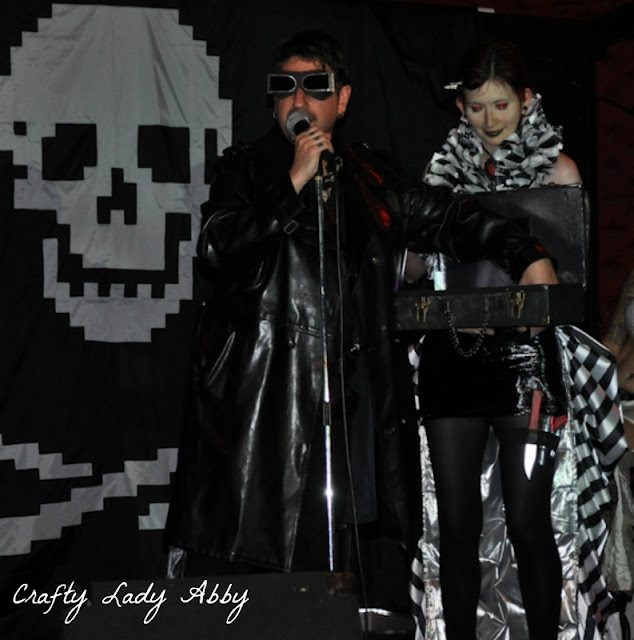 If you follow me on Facebook, you know I've been working on Mike/Mungo's cloak for many months. I sewed it a long time ago, to fit him. After he wore it once, he remarked that it would be better if the front was closed up more, so I carefully zig zag stitched the front pieces together, and added another buckle at the top (now there is two). It's taken me many months to finish hand painting the cloak. I finished everywhere, but the hood. The texture of the fabric is now a bit rough, so I wasn't sure if Mike would feel comfortable with that texture on his head. However, I might still finish it off, since in the photos, it's obvious that it has no pattern on it. The pattern is based off of a circuit board, but to me looks more maze like. Still, the cloak looks amazing on! 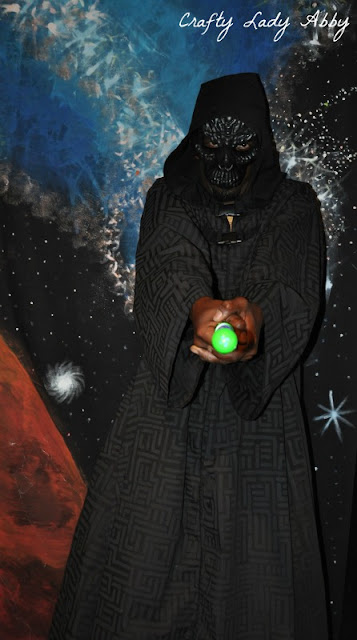 The group photo was taken after our belly dance, Khalima/Maxilla Mandible had to leave. We meant to take a photo with the four of us, but we were too busy before we performed. The backdrop is a space scene that our friend Shelia and I created one day at my house, for this event. I painted the planet (bottom left) and she painted the Crab Nebula. We painted the stars, and other small space things together. Noah/Captain Orlock is holding one of the Nerf guns that I paint modified. Mike/Mungo is holding the two swords that I paint modified. 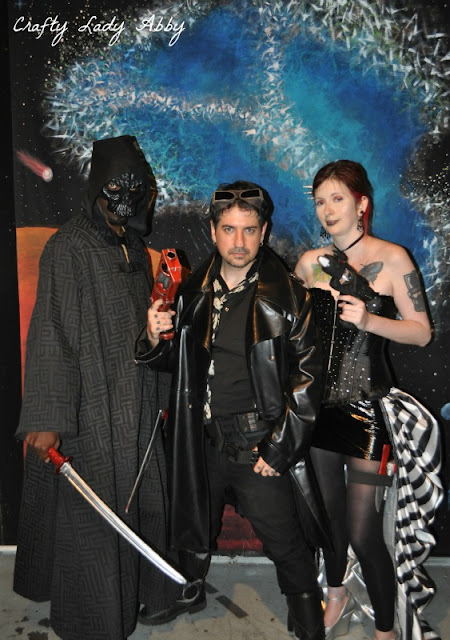