Recently, two of Noah and my friends had a cookout. There was a request for targets, to shoot at with bb-guns, so I made a skull target.


Our friend Nathan holding the target for me. 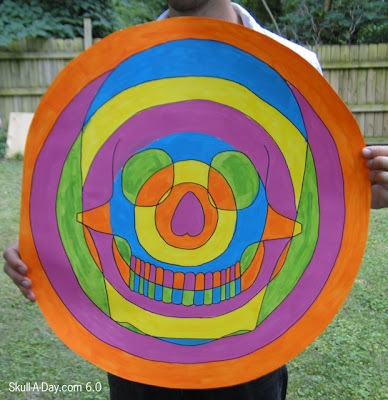 This is after it had been shot several times. You can see the hole in the center of the nose, which has Noah's star around it. 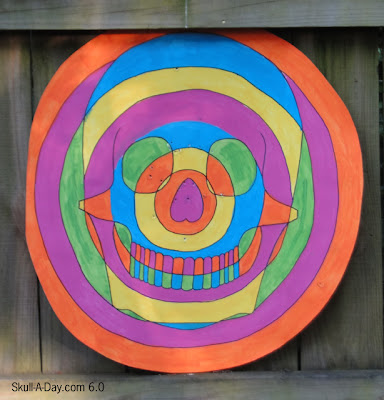 Noah and I figuring out where a shot hit. 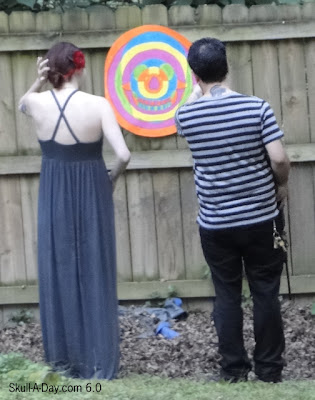 I had wanted to make a skull target for a long time, but had no motivation to make one. This activity was something I had never done, so I made a brightly colored target to mark the day, and give other people something different to shoot at. I used a pencil to draw the design. Then, I used a black marker to trace the skull lines onto a large piece of white poster board. I used bright acrylic paint and a foam brush to paint the rings, so the colors alternated where the skull design intersected with the rings. I decided the nose should be the bulls-eye, so I painted it pink. After the paint was dry, I outlined the design with the black marker. Noah was the only person to shoot the nose right in the middle, so he drew a star around it. I managed to be a decent aim. I guess all those years of Mario Bros Duck Hunt paid off. That's creepier than shooting a target as an adult.


On Thursdays in the 6.0 year, I will post my own Dia de la Abby creations.  On Thursdays in the 4.0 and 5.0 years, I posted my Dia de la Abby creations and occasionally tutorials with instructions on how I made my pieces. Hopefully you feel inspired by my posts just as I was by Noah's Skull-A-Day 1.0 daily project. Want to find me elsewhere, follow me on  Facebook, my Blog, Google+ and/or Twitter.