Today is Pie Day! You know pie, as in 3.14...the number to help figure out circumference. However, to celebrate Pie Day, people make the other kind of pie...the edible kind. Recently, my husband bought me mini pie tins. I like testing mini batches of new recipes, and I know in our house we won't eat large amounts of the same thing for days...even delicious pie. Here several recipes for mini pies to eat on Pie Day...or any day you're in the mood for a small pie.


I love a good cherry pie, so when I saw these DIY Pies in a Jar on Green Wedding Shoes, I started salivating a bit. These are cherry pies, but could easily be done for other fruit pie flavors...and maybe some other varieties if you're willing to test that. 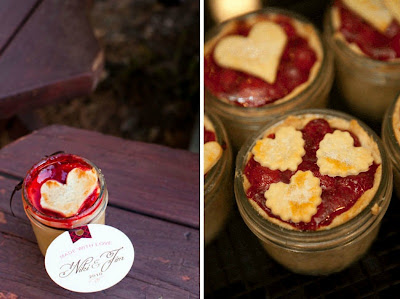 A couple years ago, I learned that my mom hated pumpkin pie! What is this madness!!!! Pumpkin pie is delicious woman!!! Why did I give you special pie crust protectors! (to make delicious Kentucky Derby pie apparently...) So, since that awareness was made, she refuses to bake me any more of her delicious pumpkin pies, and I only get the store bought kind...from my husband, who feels for my pumpkin pie cravings. Maybe I can convince her to make mini ones for me...or write down her recipe and do it myself. I found these Mini Libby's Famous Pumpkin Pies on Very Best Baking. 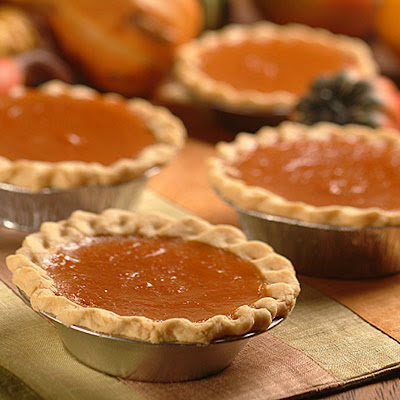 When asking my family which other kinds of pies I should include in this post, my daughter suggested lemon meringue pies. This is actually a good fit for this post, since my mother in law makes mini versions several times a year. Now, lemon pies are tricky, so they will take some practice to get them baked just right...well to set up, so their not runny. She always laughs at me when I tell her they are so good, I don't care if they are runny. Thankfully, she's gotten better at making them. Here is a great Mini Lemon Meringue Pies recipe from the mother of making crafting hip, Martha Stewart. 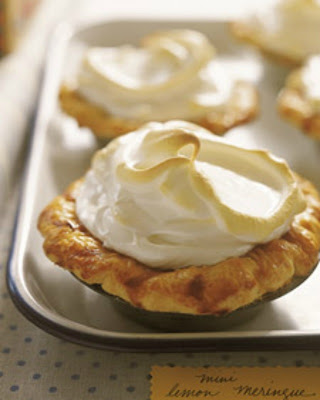 So, we have a few fruit and veggy pies, what we need now is CHOCOLATE! What I enjoy more than pie, is chocolate...so of course a mini chocolate pie would be perfect...and I'll probably need about 3. Here is a great recipe for Minny's Mini Chocolate Pie from Brownie Bites. It was inspired by the character Minny Jackson in "The Help" (both the book and movie). 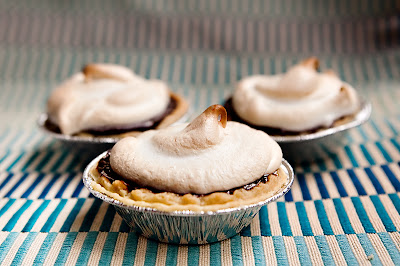 So, we have desserts covered (though I'm sure there are other flavors available), what about dinner or lunch? I saw these Mini Shepherd's Pies by Inspired Taste, the other day on Pinterest. I've had a shepherd's pie before, and it's a delicious combo of meat, potatoes, gravy, and flaky dough, but they are normally HUGE.  I'm never able to finish one. However, a mini version, I could do. 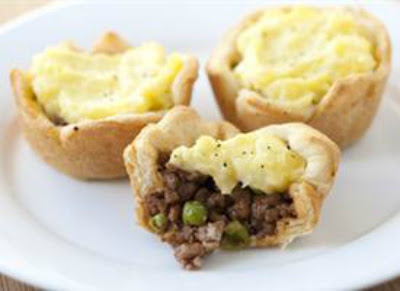 I was describing Shepherd's pies to my daughter, who wasn't fully listening, and asked if they had chicken. That lead my mini wandering to find a mini version of chicken pot pies. These Mini Chicken Pot Pies from Pillsbury look delicious. I'm not a huge fan of chicken pot pie, but these I could do, since they are little. 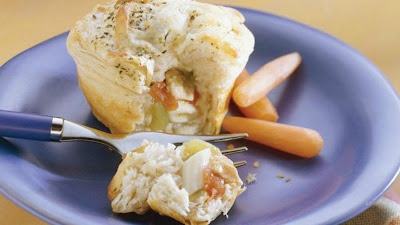 I have several friends that are vegetarian, as I'm sure several of you are. This variation from Dishin' About Nutrition, is Mini Veggie Pot Pie with a Sweet Potato Biscuit Top. It's packed full of different delicious veggies. The sweet potato biscuit top gives a nice texture and breading, like a traditional pot pie. 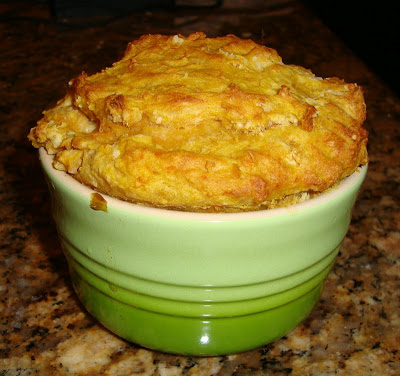 There are many mini pie recipes, these are a few of my favorites. Happy Makery!
Email Post
Labels: baking dessert pie recipes