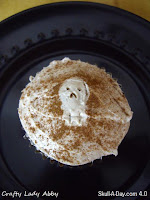 It's Fall and that means I have an insatiable hunger for all pumpkin foods. My best friend, Kit McSmash of Make A Think A Week, has the same yearly craving, so to help with that, we made Pumpkin Spice Cupcakes. For the cake part, we followed the recipe, but since we wanted to make cupcakes and not a cake, we changed a few things...


Batter in liners and pans in the oven.
The amount of batter was enough to make 20 cupcakes. Since, these are cupcakes and I have a gas oven, I baked them for 15 minutes at the recommended 350 degrees. 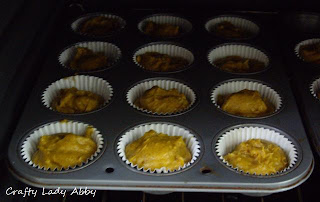 I used a cookie dough scoop to neatly scoop the batter and place even amounts in each liner. I used over filled amounts. I suggest eyeballing the amount that each liner has. The general rule of filling, is to fill each section 2/3rds of the way, so when baked, the cupcakes aren't over filled. This batter is thick, so using the scooper worked well...sort of like it would with scooping cookie dough. I forget where I got this, but you could probably get one at a kitchen gadget shop. 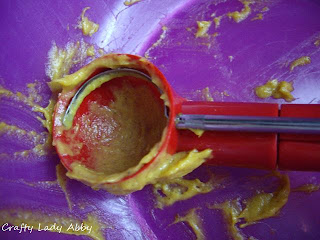 This is the amazingly crafty Kit McSmash licking the beater. The pumpkin spice batter smelled that good. I don't think she actually ate any raw batter since it has eggs in it. 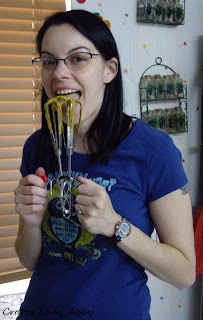 Instead of making the cream cheese icing ourselves, we bought the canned kind. Kit scooped it out of it's container into a bowl. Then, she added the recommended amount of cinnamon and a bit of nutmeg. This gave the icing a bit of a spicy flavor...mmmm. 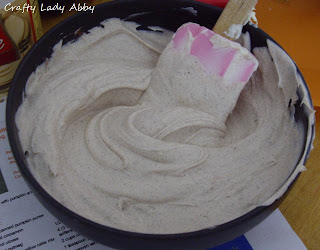 Since ovens vary, to make sure they are baked, use toothpicks to poke a few different cupcakes. If it comes out clean or with cake bits stuck to it, they are done. If it comes out gooey with batter, obviously they are not done, so put them in the oven for a few more minutes and recheck them with more toothpicks. If they are done, let them cool for at least 15 minutes before icing. If they are not cooled, your icing will melt when you apply it. 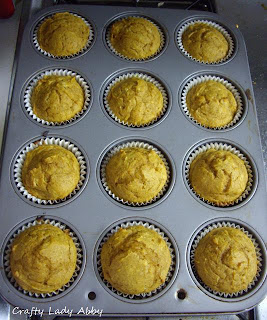 Take the cooled cupcakes out of the tins and place them on cookie sheets. This will make icing easier, because you can easily pick them up while icing, let dry without touching and move them somewhere else without messing up your icing. We used regular kitchen knives (not the sharp kind, the type that comes in flatware sets...spoon, fork, knife...that knife) to ice each cupcake. We personally don't liked lots of icing (icing overkill) on our cupcakes, but if you do, use a frosting bag and tip to apply a generous amount of icing to each cupcake. 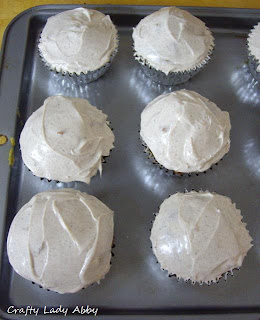 Since I needed to decorate mine with a skull, I used a template method to do this. I folded a small piece of paper in half. I open the paper back up. I used a pen and drew out my skull along the fold. I folded the paper again and cut through both layers, along the skull outline, using small scissors. When I opened it, I have an even skull negative (left) and positive (right). I wasn't sure which would make the best skull, so I used both on different cupcakes. 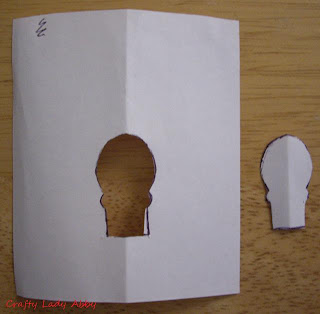 This my 1st attempt at using the positive skull. I put my cupcake on a plastic plate (not this fancy one), to catch any over spill of cinnamon. I tried sprinkling cinnamon on straight from the container, but it poured out unevenly and heavy. I also tried using a small baby spoon to sprinkle it on, but my hand was too shaky and again, it was a heavy application. Even if I won't eat it with that much cinnamon on it, however, you can see the outline of the skull. 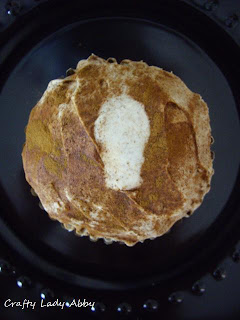 For attempt #2, I used the negative template. I used the spoon to sprinkle the cinnamon in the space. I packed it down with my finger. When I tried to pull the template up, it pulled at the icing, but I could sort of fixed that with more icing and a knife. I tried to apply icing on top of the cinnamon, so I could make eyes and a nose, but because of the heavy cinnamon, the icing wouldn't stick and the icing picked up cinnamon. Also, it was hard to control the over pour. This is the point where I decided to try a different application method. This brings us to... 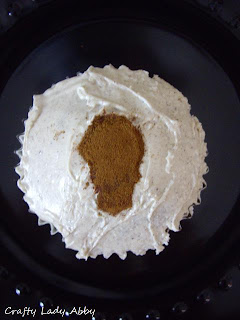 ...attempt #3. I used the positive skull again, but since the other methods left excess cinnamon on my plate (again, not this pretty one), I chose to pinch some of that with my fingers and sprinkle it over the template. This worked great because I could easily control the application amount. I made the area around the template heavier, so the image showed better and the other areas lighter, so the cinnamon taste wouldn't be super heavy. For the eyes, I used a toothpick to poke holes straight down into the cake. Since the cake color is darker than the icing, I knew it would show through. For the nose, I used the toothpick to poke holes at an angle, so elongated "nose" marks would be left. For the mouth, I used the toothpick to carefully draw the teeth lines. 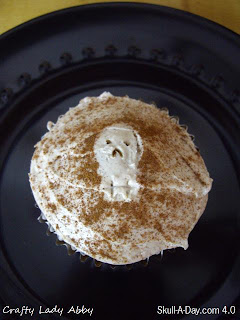 Overall, I'm pleased with how these turned out. I ate mistake #2 and it was delicious. Before I did the cinnamon decoration, we had to pick up my daughter from her bus stop. We decided that if you wanted an extra spicy flavor, that decorating with candied ginger would be good. It's is sweet, but has a nice bite to it. Also it adds another texture. However, we couldn't figure out where to get any, nor did we want to go to a grocery store again, so cinnamon was chosen instead. I have a lot of cupcakes, so that should satisfy my pumpkin cravings for a few days.
Email Post
Labels: dia de la abby Fall food recipes skull a day 4.0 skulls