This piece is much more cheery than most of the of the Dia de lo Muertos (Day of the Dead) shrines that I've seen, but that is because of who it is for, my paternal grandparents. The times I enjoyed the most with them were good. For this shrine, I found a tombstone like wooden box that opened. This both reminded me of a tombstone and a house. Since my visits with my grandparents were at their house, I felt depicting some of my favorite parts of their house, fitting. Now, my grandmother passed away when I was 12 and my grandfather when I was 21. After he died, there were some traumatic events that followed (making this has also helped me cope) and eventually their house was torn down. Making this was very hard, because it's only based on memories that grow more distant daily.
For the outside of the box, I chose parts of my grandmother's gardens and the outside of their house, including my grandmother's sun room. Before the house was torn down, it was still filled with plants. Ivy grew all around the inside of it. I loved sitting in there and looking at the plants. It was the calmest place in the house. For the shrine, this was all done with acrylic paint, which was fairly easy, so I'm not writing a tutorial on that. I will say that I used white paint to prime the outside and inside of the box. I then drew the design I wanted for the house (boards, stones and window) with a pencil before adding the grey paint. 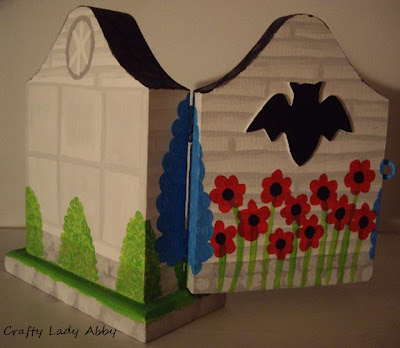 For the inside of the box, I chose my grandparents' cherry tree, on the door and their grape vine that had a bench. They had another grape vine too, but I chose the one with the bench, so I had somewhere to sit the figures. We used to sit in chairs by the cherry tree. When the cherries were ripe, we would pick them. She and her female family members would make us tarts and pies. They were delicious. We used to eat the grapes from both vines. The one I chose is also significant because when we made apple butter, we would sit on it and watch the adults make it. After my grandmother died, we didn't make it any more. My parents now have that apple butter kettle. On the property, were other kinds of fruit and nut trees, as well as crops. All of that is gone now. 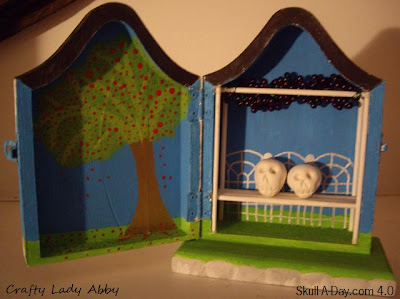 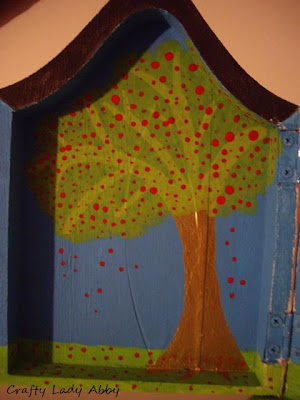 For the bench area, I used a silver paint pen to draw the metal gate that separated my grandparents yard from my great uncle's yard. For the white bench and vine trellis, I used kebab skewers. I painted them white, measured them fit the box, used an xacto knife to score the lines to cut, broke them at the score line and used E6000 to glue the pieces into place.
For the grapes, I strung small purple round beads onto 26 gauge (really thin, so be careful) green wire. I started with a 4 inch tail. I slid 3 beads up, held them in a triangle shape and twisted the wire to secure them. This forms a cluster. I left a space and did the same thing to the next three beads. I did this for all the beads I had strung. After I was done twisting the beads, I cut the wire 4 inches after the last twisted cluster. I twisted every other cluster together to make the "grapes" more intertwined. After I was done with that, I made sure this part would fit in the top area of the bench. I wrapped 1 tail around one end of bench top and the other tail on the other end of the bench top. You can see the wraps on the front of the top. The beads are light enough that you will not have to secure this with glue. 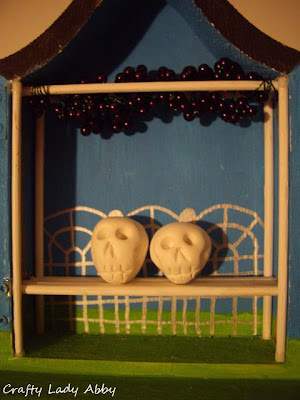 For the skulls, I used while polymer clay. I rolled round balls of clay. I made one end slightly pointy, for a chin. I angled and rounded the back of the ball so it would look like the back of a skull. For the eyes, I used the end of a clay tool. I stuck it in the clay and wiggled it around to widen the eye socket. For the nose, I laid a point clay tool sideways, to make a long shape. For the teeth, I used the pointy end of the tool to draw the teeth. I used the side of the tool to sculpt the sides of the skulls. These are unbaked. The 1st set I made, I baked and they burned before my toaster had reached the correct baking temperature. I wanted to make sure there was a nice set for photos. I will attempt to bake these at a later date. Then, I will glue them in place with E6000. 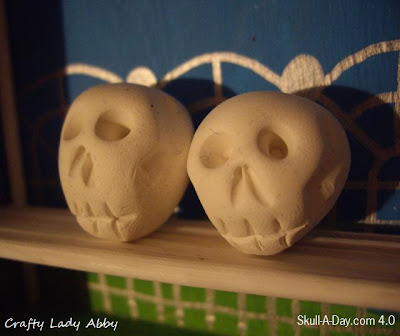