It's October and that means it's pumpkin time. I tend to fill my front porch with real and fake foam carved and uncarved pumpkins. I also have metal and ceramic ones, but most of them are inside the house. That got me thinking, I might not be able to weld or fire my own art pumpkins, but I am really handy with fabric and yarn. Of course, that means I needed to research some good whimical pumpkin tutorials and of course, share them with you all. Now, I realize that not everyone has the same skill level, so here is a variety of them to chose from.

Fabric Fall Pumpkin Tutorial
Sewing Required
You can use any sturdy fabric to make these or layer a delicate one over a sturdy one. I would add some French knots, with coordinating thread, on them to make a stubbly texture like some pumpkins have. If you don't have a sewing machine, these are small enough where you could hand sew them too. 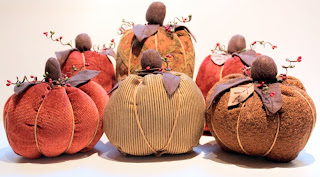 Crochet Pumpkin
At least some Beginner Crochet knowledge is needed. This one used a Half Double Crochet (HDC) stitch. If you are not familiar with it, here is this handy video tutorial. It's an easy stitch to do, so don't fret.

I would make this in a variegated orange, green or off white yarn, as no pumpkin is consistent in color. Like above, I would probably add beads, but for crochet purposes, I would string them on the yarn and crochet them in. If you want to try that and are not familiar with beaded crochet, here is a thorough tutorial for that. If you do decided on beading and have a pattern for it, vs. randomly place (how I would do it for this project, since in nature, there is no order for pumpkin bumps), you want to string the beads according to that pattern. Since these pumpkins are small, you need to string on all the beads you will be using, before you start crocheting. Also, if you do not have a variety of large needles, like the guy in the tutorial does, or you are using small beads, you can get an easy eye beading needle. It's basically one big eye. It's long, flexible and normally double ended with sharp points, so be careful while using it. 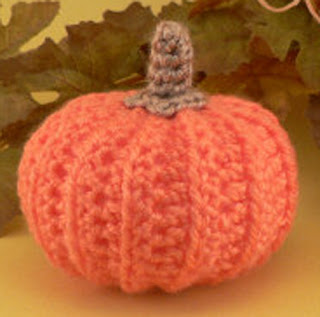 Super Easy No-sew Pumpkin
I realize not everyone can sew or crochet, or you might be someone who wants to change out their pumpkins every year, or don't have room to store Halloween decorations. This is really an easy no-sew pumpkin and uses really inexpensive materials that you can reuse. Yay, recycling. This is also something you could do with your kids, it's that easy.

One note, I wouldn't personally use my toilet paper tubes, with the toilet paper still on them. To me, that is too costly, but I might use a few toilet paper rolls tied or taped together for some stability and do the rest of the steps the same. This also might be better to use where the pumpkins can be kept dry, say a covered porch or in doors. These are fairly large, but you could cut down the size of your tubes, use less bags and a smaller square of fabric. 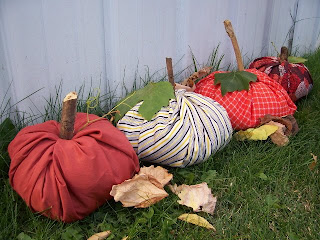