It's too early to carve pumpkins, because come Halloween, you will have rotting messes instead of nice pumpkins. However, it's cool enough to start hoarding pumpkins and decorating them without damaging the pumpkin. You can use any of these ideas on real or fake pumpkins, that is totally up to you.
Recycled Stocking/ "Sexy" Pumpkins
This amuses me, because pumpkins don't need to be sexy to look good. However, the textures and patterns look great stretched over the pumpkins. This is also something you can wash after using and easily store for the next Halloween. This idea can also be used for vases and maybe hurricane candle holders. It's a great use of old stockings that might have runs or tears. Fishnet and crochet (which is actually knitting, but the term fits the lacy effect they have) stockings stretch well and are durable. I like the black, but this could be uses with other colors too. Just experiment to see what works best. If you don't have any ripped stockings, some fabric stores sell stretch mesh, fishnet and lace fabrics, and you can use those instead.
The instructions say "snip off the foot of the stocking", but to me, this is unclear. I will assume they mean to cut the stocking away from the waist band, or if you are using thigh highs, from the thigh band. I would then gather up the stocking, like you would if you were going to put them on, then stretch the gathered tube around the pumpkin, centering the foot part on the bottom of the pumpkins. Snip off the excess that comes above the stem. Save the excess for another pumpkin. Use ribbon to tie the top of the stretched stocking around the stem. Voila, a sexy pumpkin.

Glitter Pumpkins
I've seen many glittery Halloween decorations this year. I recalled the glittery pumpkins that the talented Martha Stewart made last year, I think. This one is simple enough. It adds some extra sparkle and luxury to your porch or house. You can pair these pumpkins with the "sexy pumpkins" for a grand look. 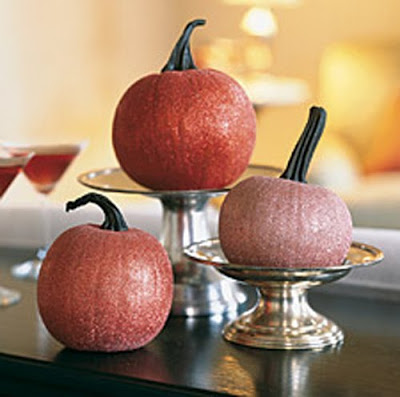 Painted Pumpkins
Painting a pumpkin, to me is a fairly obvious way to decorate a pumpkin without causing it to rot. However, these lovely white and black pumpkins caught my eye. I'm someone who like to use different techniques together, so for this post, I'm trying to show how you can pair different style pumpkins together and still create a great look. If you are putting these outside in a non-covered area, then I recommend spraying them with a clear sealer that will keep the paint from chipping and washing off. If you are not good at free handing, use a stencil, then spray paint your stencil image onto your pumpkin. Something I was thinking would be neat is black sprayed flocking. You know, that fuzzy stuff that looks like velvet. Also, spray paint comes in metallic colors which would add some luster to your pumpkins. 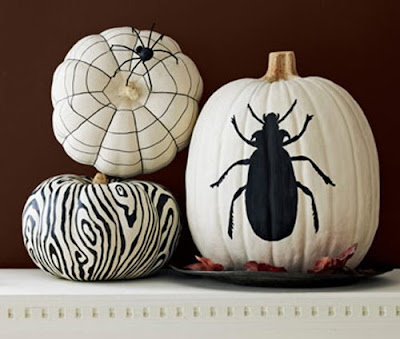 Rhinestone Swirl Pumpkin
I figured we needed some additional glamor for our pumpkins. This one calls for adhesive jewels which are hot melted to artificial pumpkins. Last time I checked, having heat on a fake pumpkin is a really bad idea. Having heat on a real one just cooks it, so lets alter this idea with something cooler. You can still use plastic jewels, but use jewel glue or Aleen's Tacky Glue to adhere them to the pumpkin. Also, strings of sequins would good. This would take less time, as you are not having to adhere each individual piece. I like that. Another option is drawing swirls with glue (Aleen's Tack Glue), and sprinkling glitter on them or you can use glitter glue (the glue with glitter already in it). Instead of swirls, you can also use these glittery items to make stripes down the valleys of the pumpkin. This is something fairly easy to do and doesn't require much of a steady hand as you are just following the valley with the glue bottle and then the glittery item. Of course with any of these methods, you don't have to stick to gold. I would stick to jewel tones and metallics, because we are going for extra sparkley and glamorous. 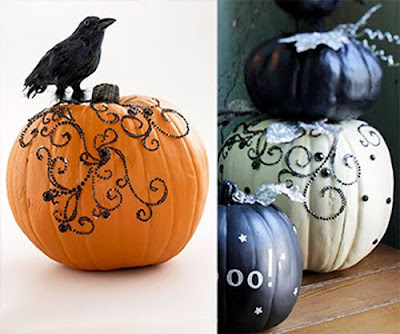 These are some basic techniques that with my additional advice, you can take beyond basic. I hope to see lots of fabulous glittery glam porches and houses.
Email Post
Labels: crafts halloween painting pumpkins tutorial