I figured in the spirit of Halloween, I should include an adorable photo of me as a child, in a bunny costume that my mom made us. I have 2 brothers, and I know at the age that each could fit into this, we wore it. I want to say there was another costume too...a bear or lion. I'll try to find those photos at my parents' house. I'll have to sort through thousands of photos, but it will be worth it. That is my mom with the jeans in her boots. My older brother is behind her in a classic vampire costume. I don't think my younger bro was born yet. That would make my older bro about 7 and me about 2. 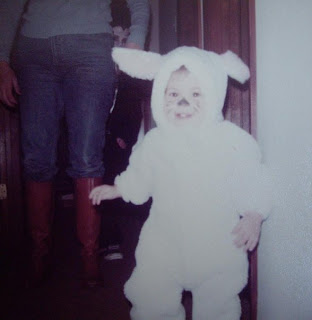 I suppose if I share this one, I should share a couple photos of my daughter in past Halloween costumes.

She was about 18 months here. I know this will seem odd, but she designed this dress herself. I took her with me to the fabric store and let her pick out her fabrics. I had her in the cart and we went to the cottons, she picked out the blue print and the shimmery blue. I took her to the tulle section and she picked a sparkley silver. I altered a princess costume pattern. I want to say the actual pattern was something for The Wizard of OZ and this was an alteration of the Wicked Witch of the West's costume. I think I used this pattern, but I obviously altered the front and left off the corset belt. Essentially, I made the dress front top and full skirt, then made a 2nd dress with the front section cut away a bit to allow for the under dress to show. I sewed button holes along the opening of the top dress, so I could put the lacing through. I don't remember how I made the sleeves, but I think it was an alteration of Dorthy's sleeve, with gathered tulle for the puffy area, instead of the blue fabric. The sleeves and hems of both layers of the bottom, are trimmed with gathered tulle. There is a zipper in the back of the dress. I make her an intricate costume every other year. 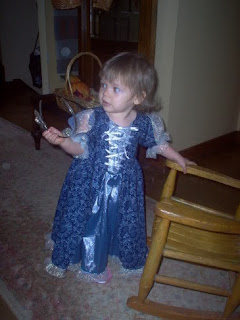 She was 5 in this one. We went to Dollar Tree for costume inspiration. They always have great inexpensive accessories. We found the witch's hat and broom there. I made the cape and dress. Both were from basic kid patterns. However, I sewed on triangles of sparkley tulle and mesh fabrics to the bottom hem of the dress to give it a glam witch look. The body of the dress is made of two layers of black cotton fabric (a top dress and a lining). The cape is made from a black fleece. 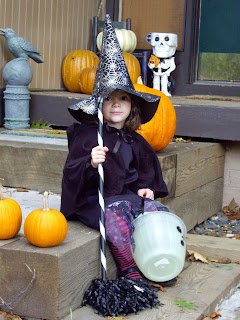 I wish I had more photos of her cute costume. I feel bad that I don't, but we have had camera and computer problems off and on since she was born, so at some times we didn't have a camera to take her photo and some times, the photos we did take are on our old computers, which need to be repaired. I must learn to back up photos onto disks.
Email Post
Labels: family halloween